A number of different factors contribute to the worrying result, including the declining state of the environment, limited access to health services and increasingly unhealthy diets in the modern world – reports Kafkadesk.

The recent data is based on the Bloomberg Healthiest Countries Index which compares the health state of 169 countries based on a variety of different factors. These factors include life expectancy as well as environmental variables such as access to clean water or the degree of sanitation in a country. Negative factors like tobacco use and obesity are also taken into account, and countries receive penalties for these.

This year, Spain secured the first place, surpassing the last edition’s winner, Italy. According to the survey,

“Spain has the highest life expectancy at birth among European Union nations, and trails only Japan and Switzerland globally.”

Moreover, experts say that the country is going to have the highest life expectancy by 2040, with about 86 years.

Another explanation for the leading position of Southern European countries is the famous Mediterranean diet, often supplemented by nuts and extra-virgin oil. 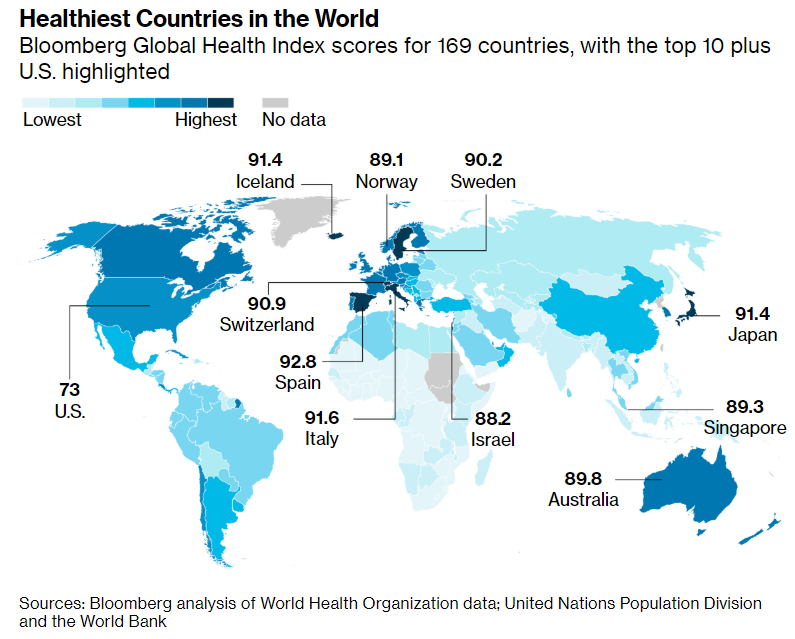 Thirteen European countries, like Norway, Sweden, Italy, Iceland or Switzerland, ended up in a respectable position on the list and are among the top 20. Two other countries in the lead come from Oceania, three from Asia, one from the Middle East and one from North-America.

Unfortunately, countries in Central Europe did not do particularly well on this list. The Czech Republic is in the best position at an overall 29th place, improving slightly compared to the previous study. However, their spot is still not ideal as they are only 22nd when it comes to the ranking on the continent.

Hungary as the 4th most obese country in the world!

Neighbouring countries are worse off, with Poland ending up in 40th position, which is actually a worse result than in the previous ranking, while Slovakia improved a bit but is still far behind in 45th position.

Hungary is actually in the worst place when compared to other Visegrád Group countries.

Although being in 48th place might seem good enough when we consider that the country came in 52nd on the previous list, but as such, Hungary is still one of the unhealthiest countries in the EU.

Hungary got 69.75 points on the health score, but 5.32 points had to be deducted as penalties.

The other countries occupying positions at the bottom of the list are mostly Sub-Saharan countries, while Yemen, Afghanistan and Haiti also have ways to go in terms of health state.