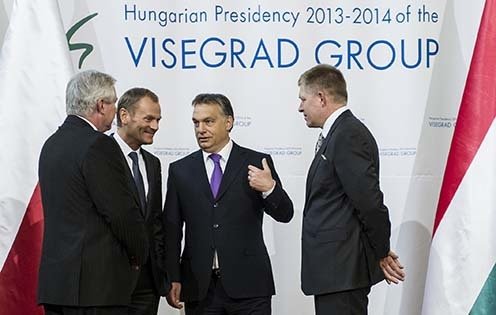 The Prime Ministers of the Visegrad Group countries (V4) held talks in Budapest yesterday, for the first time since Hungary took over the V4 Presidency.

At the press conference following the meeting, Prime Minister Viktor Orbán said that the V4 countries support nuclear energy use and expect the European Union to help Central Europe increase its nuclear energy capacity. He added that every country has the right to produce energy from the sources available and thus there should also be no discrimination with regard to nuclear energy. The EU should take each country’s power generation capacities into account and reconsider state subsidies for energy investments.

V4 Prime Ministers agreed that European production of shale gas was desirable and would support countries planning to begin shale extraction, Viktor Orbán said, adding that the V4 is also setting up a gas market forum to establish a regional gas market. The forum is scheduled to hold its first session in Budapest in October.

Steps have been taken to establish a joint representative office for the V4 countries. The first such office will be located in Ho Chi Minh City in Vietnam. V4 chambers of trade and industry will meet regularly, and V4 parliamentary speakers will begin cooperation talks in the first half of next year.

The Central European region has the biggest growth potential within the EU and will also have increasing weight, the Hungarian Prime Minister stressed.

It was also mentioned that the heads of government had agreed to prepare a common defence cooperation strategy and to hold annual exercises together. The first V4-EU unit will be ready for action in the first half of 2016.

Slovakian Prime Minister Robert Fico said Visegrad cooperation is getting more and more pragmatic and rational, and the decisions made are increasingly decisive and important. He also said that the linking of the Hungarian and the Slovak gas networks from January 2015 will contribute to the energy security of the region. The interconnector will have a capacity of 5 billion cubic metres, he said. A similar project is planned between Slovakia and Poland, he added. Mr. Fico agreed that the V4 should formulate a joint position ahead of the European Council’s December summit and the Eastern Partnership Initiative’s November summit in Vilnius.

Donald Tusk, the Polish Prime Minister, said solidarity is an important part of V4 cooperation, which is evident at a decision-making level in EU forums. It was decided that solidarity within the V4 group would continue to be definitive in the establishment of energy supply security and in EU issues.

He said Poland is committed to the joint V4 stance on protecting nuclear energy interests in the EU, on supporting shale extraction, and on setting up a V4 joint defence unit by 2016.

Czech Prime Minister Jiri Rusnok said the sovereignty of each state must be supported with regard to their decision to use nuclear energy. He said the Czech Republic supported deepening economic cooperation such as forging closer ties among economic chambers.