The Hungarian Association for Innovation sent two girls to the Intel International Science and Engineering Fair (ISEF) 2016 who competed with 1700 talented young students, index.hu writes. One of them developed a shopping application, and the other did stem cell research, which could be used for testing drugs used in chemotherapy; the former received an Oracle Academy award for her app.

Karola Bálint is currently studying compute programming, but at the time she made the app she was still a student at 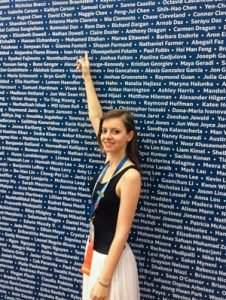 Batsányi János Secondary School is Csongrád. Via Shopmap users can display their own shopping list, and, at the supermarket, it tells users the shortest route to buy everything. The idea was inspired by Karola’s own experiences: it happened many times that she wanted to do the shopping as fast as possible, but could not find something, and ended up spending too much time at the supermarket; but with the app users will see where the items they want to purchase are.

The application got the Oracle Academy’s $5000 (1.4 million HUF) special prize. Only a fraction of the participants got special prizes, and $5000 was the highest amount anyone received. She was not the first Hungarian to win at the contest; Dániel Rátai received the Seaborg SIYSS Award in 2005 for Leonar3do.

The app tells the specific route for individual items as well, even if we don’t have a shopping list; it downloads the shop’s data via the internet and calculates the shortest route for each and every item. The app also stores previously made lists.

Karola has since rewritten the programme, and it also has a new design. The app constantly has to refresh its database, and negotiations are still going on with bigger supermarkets, because only fictive stores have been used so far.

The other Hungarian contestant, Szilvia Király, is a third year student at Városmajori secondary school. Szilvia first visited the Városmajor Stem Cell Laboratory in 2012, during Researchers’ Night. She has already developed an interest in stem cells because her father died of leukaemia. Since the Researchers’ Night she visits the laboratory three or four times a week. Szilvia’s research area is stem cell transplantation. 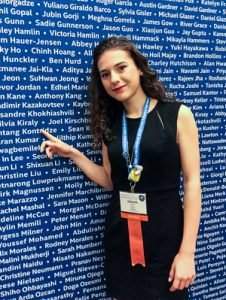 It was Szilvia’s idea to transform the cells into endothelial cells and make blood vessel, which could replace the artificial blood vessels that are used during surgeries, for instance, but the patients’ hearts cannot adapt to them frequently. The laboratory is currently importing stem cell from the United States for their research.

After being certain that stem cells can be transformed into blood vessels, and they are similar to those found in an adult person’s body, Szilvia tried building a 3D frame; she put the cells onto a frame that had no cells at all, and tried different methods to see if they attach to the frame. One of the methods was successful, and Szilvia is now working on covering the whole frame with cells.

After a European contest Szilvia’s goal shifted towards pharmaceutical research, and would use the frame she developed to test how a patient’s body would react to certain drugs. Each patient could receive individual care, and doctors could predict which drug would or would not work. Szilvia’s plans include testing drugs used in chemotherapy so patients could receive treatments that are best suited for their needs.

Szilvia is currently doing market research at Semmelweis University to estimate whether companies would be interested in such a method, if it’s too expensive, or not effective enough. No one has ever done such a research before and it’s currently going through the patenting process.