Robert Berenyi’s ’Sleeping Woman with a Black Vase’ got lost 90 years ago. The avant-garde artist was part of the ’Nyolcak’ artistic movement, and was considered to be a representative of the Fauves as well. It was Gergely Barki, an art historian who tracked down Berenyi’s painting, reports hvg.hu. 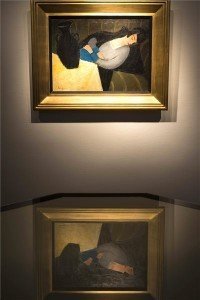 The discovery was quite an unusual one, as Gergely Barki noticed the missing artwork in one scene of Stuart Little, the movie. Barki found the set decorator of the film, and after a long investigation, he finally got hold of the painting in Washington.

The ’Sleeping Woman with a Black Vase’ is currently in private possession, but other paintings of Robert Berenyi are displayed by Virag Judit Gallery. The painting that has finally found his way home is of great cultural importance, but it is not the only piece of art that had been lost and found after decades. In 2012, Virag Judit Gallery found a painting by Csontvary that has been missing for over a hundred years.

based on article of hvg.hu
translated by Laura Kocsis

Hungary's measures to contain the novel coronavirus epidemic were among the most…
Social Media Auto Publish Powered By : XYZScripts.com