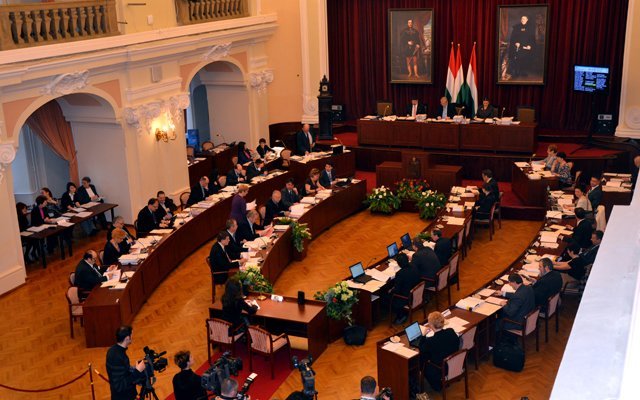 (MTI) – President Janos Ader has signed an amendment containing changes to the local election system under which Budapest’s city council will comprise the mayor of Budapest, 23 district mayors and 9 members from election lists rather than directly elected councillors.

The president signed the new law on Monday, according to parliament’s website.

The amendment, initiated by the ruling parties, was passed with 133 votes for and 53 against on June 10.

Parties of the opposition and civil groups voiced protest against the changes, seen by critics as an attempt to ensure a government victory in Budapest in the upcoming local elections. Opposition parties called on the president to withhold his signature from the law.

The opposition Socialists said the party would ask the ombudsman for fundamental rights to initiate a constitutional court review of the amendment. Deputy group leader Zoltan Lukacs told MTI in a statement that the party would directly contact the top court to submit an appeal but this requires the support of 25 percent of lawmakers in parliament. He accused Ader of being a “party soldier” for whom “Viktor Orban’s order” is more important than the free and fair elections.

Radical nationalist Jobbik said it would make every effort to prevent the election law from coming to effect. The party’s Budapest chairman Gyorgy Szilagyi said Ader signing the law has enabled an “anti-democratic system that could be described as election fraud.” Jobbik lawyers are currently examining possible action to prevent the amendment, including contacting the ombudsman and the Constitutional Court, he said.