All-Hungarian final in Budapest as FTC and Érd Qualify 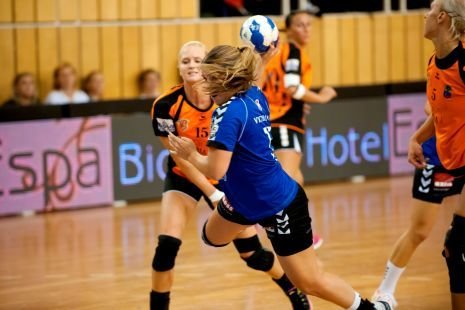 Budućnost Podgorica, FCM Midtjylland and MKS Lublin have to wait one more day for their last opponent in the Women’s EHF Champions League Group Matches, but they already know they all will visit Hungary in near future as two teams from this country will meet in the final of the Qualification Group 2 in Budapest. Érd cruised to the final after an impressive 34:25 win over Swiss team LK Zug Handball while FTC Rail Cargo Hungária had to come from behind in the semi-final match against Lokomotiva Zagreb to win 26:23.

Érd won this clash with a self confident performance leading from the beginning to the end of the match. There was no doubt that Hungarian team will be victoriuous in their debut in the European top flight, while Swiss champion Zug will have to settle to the Cup Winners’ Cup and Swiss handball will have to wait longer for their first team in the premier European competition.
“I hope it wasn’t our real face. I wanted to give possibility to play to all of our players but I couldn’t. My players were too excited, sometimes they looked like they have never been on the court before. We have to cool down and show we have a place next to the best teams,” Érd coach Edina Szabó said for DigiSport.
Anna Kovács was the top scorer of Érd with eight goals. “We have been expecting a team like this. Sometimes we could raise the difference, but Zug always could come closed. We should fix our mistakes and we just can be better like today. Tomorrow it will be an equal match in the final,” she said. It was a more exciting match than most expected. Lokomotiva, who were second in the Croatian League after Podravka, had an extremely powerful start. Their defence was excellent and was the main reason why they led by two goals after 30 minutes.
Ferencváros, who had beaten defending champions of the European top flight from Győr in the first round in the Hungarian league, struggled in the attack. But in the second half Croatians looked to get tired and Zácsik showed great form at the Hungarian side.
“We were sleepy in the first half of the match. We couldn’t get the rhythm and missed many chances. I really praise Lokomotiva, they were a much stronger opponent that we expected. They are a really great team. We have used much more of our enegry than ÉRD, so I’m expecting a very difficult final on Sunday,” FTC head coach Gábor Elek said.
Szandra Zácsik, who was the most effective player with nine goals added: “I don’t want to remember to the first half. We thought we can win this match with half of our energy. But our coach said in the break our jersey will not win the clash on its own. So we have arrived with competely different mentality to the second half. If we can show a perfect defence on Sunday just like against Győr, we can win against Érd.”