Balog tells Roma: “Our task is to go from victims to being responsible”

(MTI) – Instead of the role of victim a sense of personal responsibility is needed, the minister of human resources told a conference of Christian Roma on Saturday. 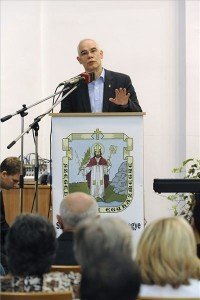 Speaking in the south Hungarian city of Szeged, Zoltan Balog told the Christian Roma Professional College Network conference, “your future and the common future of the Hungarian nation” rides on gaining a sense of personal responsibility.

“We will have achieved this mission for which we were born when we undertake responsibility for ourselves,” he told the undergraduates, adding that “a real elite always undertakes its mission and responsibilities.”

“The reason we’re together is so this shouldn’t be too much of a burden,” he said.

Balog said the self-organisation of the Roma was a major task of the state and government. He said it is important that every social group with its own identity should be self-organising and, besides seeing to its own interests, is capable of cooperation, too.

Hungary’s Roma should seek alliances with, for example, the churches. The Christian churches today are much stronger in this area than even five or ten years ago, he said.

Florian Farkas, chairman of the National Roma Self-Government (ORO), also spoke at the event, saying the Roma community counted on Gypsy graduates, and he called for more Gypsies with degrees and a sense of responsibility.