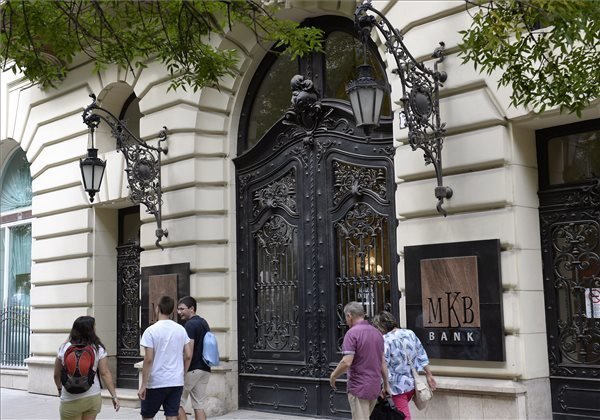 Budapest, July 24 (MTI) – Germany’s BayernLB on Thursday said it is set to sell its Hungarian unit, MKB, to the Hungarian government.

“In return for the purchase price of 55 million euros, BayernLB will waive 270 million euros in claims due from MKB,” BayernLB said in a statement published on its website.

BayernLB must part with its almost 100 percent stake in MKB by 2015 as a condition for a bailout it received during the global financial crisis.

BayernLB CEO Johannes-Jorg Riegler called the sale of the unit “a huge relief for us”. “It will put an end to a difficult chapter in our bank’s history and let us focus on the future,” he added.

Markus Soder, finance minister of the Free State of Bavaria, which is one of the owners of BayernLB, said negotiations on the sale were “tough, but fair”. “As opposed to other sales, there will be no outstanding sums and so the Hungary chapter will be closed for good,” he said.

Economy Minister Mihaly Varga confirmed in a video posted on the government’s website that the state would pay 55 million euros for a 99.9 percent stake in MKB, but BayernLB would raise capital at the unit by 270 million euros before the transfer.

“That means that the purchase of the bank will not cost Hungarian taxpayers anything,” Varga said.

With the purchase, the government aims to strengthen lending activity and contribute to a more competitive banking system, he said.

We hope that MKB can reclaim its strong, competitive position in 1-2 years, creating the possibility for a market sale, he added.

The Economy Ministry said in a statement posted on its website that the agreement on the purchase was in line with the government’s strategy of “increasing domestic ownership and reducing foreign ownership in Hungarian banks”. The ministry noted that foreign-owned banks in Hungary had taken “significant financial resources” out of the country during the crisis, putting pressure on the stability of the forint as domestic corporate lending came to a halt.

“A mainly foreign-owned banking system not only makes a post-crisis recovery difficult, but further deepens the crisis as a result of the withdrawal of resources,” the ministry said.

“Recognising and understanding these trends obligates a responsible government to work out a new strategy,” it added.

The government aims to turn MKB into an “active, profitable” bank, the ministry said, stressing the importance of “keeping and expanding” its client base.

State secretary of the development ministry Sara Hegman Nemes said that the government’s move would help strengthen the Hungarian banking system. Speaking at a roundtable at the 25th Balvanyos Summer University in Romania, the official said it would be “ideal” if the state could acquire a 30-percent share in the banking sector, as it would ensure a dominant position. Concerning the MKB acquisition, she said it had been an important consideration that the bank had a significant retail business and a large network.

Hungary’s opposition E-PM party alliance, however, criticised the move and called it a bad deal. In a statement, E-PM board member Levente Papa said that the MKB portfolio was full of bad debts which he said the government would have to consolidate out of taxpayers’ money.

Papa said that the state running commercial banks was “more like the Russian or Chinese practice”, and demanded that the government should make public all appraisal studies that preceded the purchase.