Any passenger can easily bypass the queue at Budapest Airport by using the Fast Track Lane, which is now easier to access than ever before. In the last few days, voucher vending machines have been placed at the entrances to the passenger security screening checkpoint, whereby the Fast Track Lane is accessible in a matter of seconds, internationalairportreview.com reports. 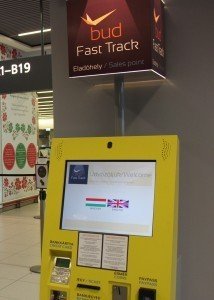 According to internationalairportreview.com, Budapest Airport’s popular convenience service is now available to all passengers, based on individual decision or airline entitlement.

From now on it may not be so much of a problem if someone arrives at the airport later than two hours prior to departure, as recommended by airlines. The most convenient way to avoid queuing during the peaks is to take the Fast Track Lane through passenger security screening.

Budapest Airport has now expanded the number of voucher sales points for the Fast Track Lane by installing two vending machines. Here passengers can pay HUF 1, 500, approximately € 5 to buy a voucher from these vending machines that have been installed in Terminals 2A and 2B. Previously, the queue jump service was only available to first and business class travellers, before Budapest Airport made it accessible to all passengers two years ago.

Thus, the Fast Track Lane is also available to passengers travelling economy class or with low cost carriers, if they purchase this service separately. The new Fast Track voucher machines accept cash as well as credit cards, and are even suitable for contactless credit card payment (PayPass).

“We have reached the highest western European service levels by expanding our Fast Track Lane service with these user – friendly vending machines” said Manel Moreno, Head of Commercial Landside Services , Budapest Airport. “We hope that this new opportunity will quickly become popular with passengers, since it is advantageous for them to be able to access the SkyCourt more rapidly, using the Fast Track Lane. This way they have more time to do some shopping or to sit down for a coffee, and can also reach their boarding gates sooner.