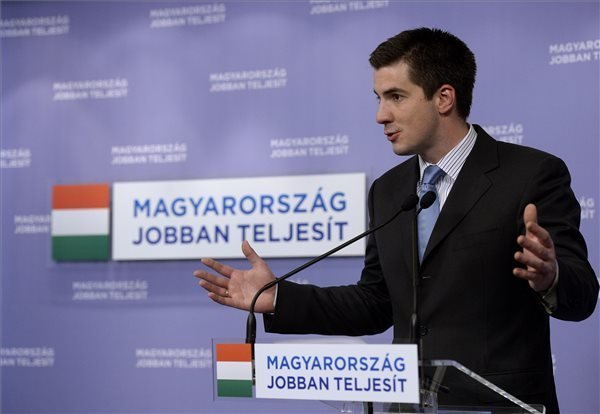 Budapest, April 13 (MTI) – Having won two-thirds of the seats in the new parliament, the governing parties have received a clear mandate from voters to continue the work started, Fidesz communications officer Mate Kocsis said today.

Commenting on the election result at a press conference in Budapest, Kocsis said the new parliament and government, due to be set up in May at the latest, are facing a range of tasks.

Kocsis said it is unprecedented in Europe that a party alliance should win a two-thirds majority in two consecutive elections. After the tight governance of the past years involving many difficult decisions, this means the government enjoys the confidence of the people, he added.

Kocsis said people have said ‘yes’ to job creation, the strengthening of the economy, support for SMEs, social security, burden-reducing for families, energy price cuts and pension hikes. Voters have also said ‘yes’ to the new economic policy, the labour-based society and ‘no’ to hatred, extremities and exiting the European Union, he said.

In connection with the May 25 European parliamentary election, Fidesz-KDNP will represent the interests of Hungarians to the maximum extent possible, Kocsis said.

Answering a question, Kocsis said the left has still not managed to renew itself; four years after their big defeat, the left-wing parties are running the same politicians who “have already destroyed the country once”.

In response to E-PM’s criticism of the election system, Kocsis said attacking the system after the election can create the impression that something was irregular. He emphasised that every vote has equal worth in Hungary, and the election system has been scrutinised by several organisations including the Venice Commission and the Organization for Security and Co-operation in Europe. The method is not unknown in Europe and is not contrary to either Hungarian or European Union law, he added.