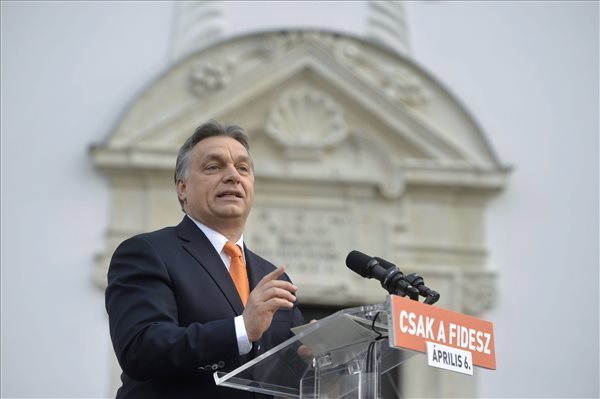 (MTI) – Prime Minister Viktor Orban, leader of the ruling Fidesz party, held an election rally under the motto “one camp, one flag” in Gyor, in west Hungary, on Thursday.
Orban told party faithful that Fidesz wants to carry on from where it has left off, and called on the crowd to support Fidesz in Sunday’s election. He warned that missing votes from the Fidesz camp would weaken it.

The prime minister referred to his government’s achievements as well as local development projects in Gyor. “We’re not asking for down payment in confidence and support; we feel we’ve already put something on the table,” Orban said.

The prime minister said that over the past four years his government had faced “tough battles with banks, multinational companies, imperial bureaucrats of Brussels”. His government’s guiding principle is “in times of trouble the bravest plans are the safest,” he said.

As the government has won the majority of battles, this tactic has proved to be the right one, he said, citing the 300,000 jobs created and the cuts in household utility bills.

Orban said his left-wing political opponents could offer only “aggression, threats and curses”. “While their passion is hatred, ours is Hungary,” he said. Referring to the radical nationalist Jobbik party, Orban said that Fidesz “has a challenger from the other side, too.” Their approach could be summed up as “Let me play lion, too”, he said, adding that “governing is a serious task and it is useful to put something on the table in advance.”

The main point of the programme of the “party standing to the right of us” is withdrawal from the European Union, but “self-imposed seclusion is a bad response, as those who are not sitting at the table should not be surprised at finding themselves on the menu,” Orban said.