Budapest, May 23 (MTI) – The ELI Attosecond laser research centre was inaugurated in Szeged, in southern Hungary, on Tuesday.

Speaking at the opening ceremony, Prime Minister Viktor Orbán said the centre was the largest scientific investment in Hungary in modern history.

“The research centre is not an investment with the purpose of catching up with Europe; it is rather about making Europe catch up with the world,” he said.

The ELI Attosecond Light Pulse Source (ELI-ALPS) project in Szeged is expected to open new avenues to reveal the secrets of matter on ultrashort timescales. 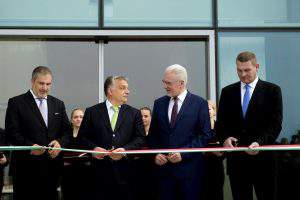 “Hungary can be a winner in the future by creating an entire network of scientific research centres so that the country becomes not only a production centre but one devoted to research and development too,” Orbán said.

The prime minister said Hungary had not got the investment as a gift but it had won it by undertaking to plough its own money into establishing the centre and “cutting out” EU resources. He added that this decision had sparked serious debate, and people questioned how it was possible for Hungary to devote 70-80 billion forints to the project when, at the time, its public finances were shaky.

“Research carried out at the University of Szeged speaks for itself, but now the centre can attract researchers and students from all over the world,” he said.

Orbán also noted that Szeged is a city controlled by the opposition Socialists, yet the government has built bridges in the greater interest of the country and the city.

Rate-setters of the National Bank of Hungary left the base rate unchanged at 0.90…
The first COVID-19 case in Switzerland has been confirmed in the southern part of the…
The Embassy of South Korea put out an ad in Monday's Népszava, offering a reward.
We and our partners use technologies, such as cookies, and collect browsing data to give you the best online experience and to personalise the content and advertising shown to you. I accept
Privacy & Cookies Policy