He praised VMSZ, a member of the country’s governing coalition, for its role in moving Serbia towards Serbia’s EU integration.

Hungarian-Serbian relations have reached a “historical summit” and the governments of Serbia and Hungary deserve full credit for this, he said.

Commenting on early general elections in Serbia and the local council and municipal elections in Vojvodina on April 24, Szijjártó said VMSZ was “the closest link” between Hungary and Serbia. The Vojvodina Hungarian community’s strong representation on a national and regional level is in the interest of both countries, Szijjártó said.

The Serbian-Hungarian inter-governmental committee for minority affairs met for the first time after five years in Subotica (Szabadka) on Monday, an event that Szijjártó welcomed.

He praised an agreement to open additional border crossing points.

Pásztor said that the stable and friendly partnership developed by Serbia and Hungary in today’s ever-changing and unpredictable world is particularly important for Vojvodina’s Hungarian community, as well as for all of Serbia’s citizens.

He thanked the Hungarian government for its support for Vojvodina’s economic and regional development programmes. 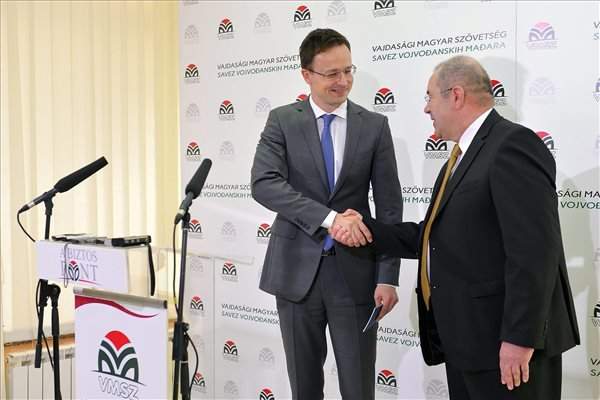 The economic achievements of Serbia’s government in recent years have been recognised throughout Europe and Serbia has acquired a strong position which deserves respect, Szijjártó said. A strong and respected Serbia is also in the interest of Hungary and ethnic Hungarians in Vojvodina, Szijjártó said at an election campaign event for the Serbian Progressive Party (SNS) in Pancevo (Pancsova).

After greeting his audience in Serbian, Szijjártó said Hungary supports Serbian Prime Minister Aleksandar Vucic and his SNS party, as well as its Hungarian coalition partner, the Alliance of Vojvodina Hungarians.

He said Hungary appreciates Serbia’s efforts and supports the country’s European integration, and will not allow anyone to boycott or slow down this process.

He added that both the Hungarian and the Serbian governments had made compromises in the recent period and showed an example to Europe, demonstrating a friendship that both countries can be proud of.

Serbia has shown how to treat ethnic minorities well and deserves European Union membership, he said.

Vucic said few politicians stood by Serbia at the accession talks but Hungary’s foreign minister was always one to support Belgrade.