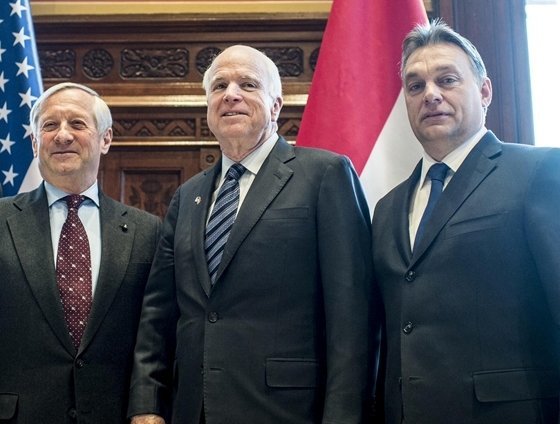 Budapest (MTI) – The Hungarian government considers US Senator John McCain’s remarks on Hungarian Prime Minister Viktor Orban and relations between Hungary and Russia unacceptable and resolutely rejects them, the state secretary for economic diplomacy said on Wednesday at a meeting with US charge d’affaires Andre Goodfriend.

The ministry earlier said that Goodfriend had been summoned to Levente Magyar’s office in connection with Republican Senator McCain’s remarks made at a Senate vote on the appointment of new US Ambassador to Budapest Colleen Bell.

During the meeting, Magyar told Goodfriend that Hungary welcomed the fact that full US diplomatic representation in Hungary had been restored thanks to Bell’s appointment, the ministry said in a statement.

At the same time, the government is repeatedly asking senior US officials to check the facts before making remarks about Hungary, to ensure that their statements are based on truth, it added.

The Republican politician said on Tuesday that Hungary was “a very important country where bad things are going on” and while “a close ally in many respects … there’s no doubt that since taking office in 2010, the Hungarian Prime Minister Viktor Orban has centralised power.” He also insisted that Hungary is “a nation that is on the verge of ceding its sovereignty to a neo-fascist dictator getting in bed with Vladimir Putin.”

Foreign Minister Peter Szijjarto told MTI on Wednesday that Hungarians had voted support for the country’s ruling parties at three elections in 2014. “On all three occasions they clearly expressed their view, and everyone should respect that”, he said. If someone bases their opinion of Hungarian affairs exclusively on press reports then they can easily get into the situation that their comments are not rooted in facts, Szijjarto added.

Asked whether Hungary was planning to go beyond issuing statements and take diplomatic steps, Szijjarto said the Hungarian embassy in Washington was in contact with the Senator’s staff and would consult with them about his remarks and background on which they were based.

Commenting on whether Hungary planned to take action to improve its deteriorated diplomatic relations with Washington, he said cooperation between Hungary and the US was excellent in two out of three areas, namely economic cooperation and security policy.

The US embassy in Budapest declined to comment on the matter at MTI’s enquiry.

Socialist leader Jozsef Tobias said that recent developments had demonstrated that the prime minister’s foreign policy had failed. He also noted that the critical remarks had been made by a Conservative US politician rather than a left-winger.

Gabor Vona, the leader of radical nationalist Jobbik, interpreted McCain’s remarks as “US pressure” and said that the US’s “growing influence” on Hungary’s domestic affairs was worrying.

In a statement, the opposition Together party said that Orban had “missed the path and is driving Hungary in the wrong direction”. The party called on the government to start rebuilding international confidence in Hungary.

According to the Liberal Party, the prime minister’s “pro-Putin, autarchic and nationalist policies undermine Hungary’s reputation”. The party said in a statement that the senator’s remarks were meant to criticise the government alone, rather than Hungary as a whole or the Hungarian people.