How lazy are Hungarians? Here is the list of laziest countries in the world!

According to a study by Journal of Health Psychology, smart people are more likely to be lazy. There are, however, proven benefits of taking it easy such as being less prone to burnout and having lower blood pressure.

But, whilst lounging is not necessarily a bad thing, some people prefer having a more active lifestyle. With that in mind, the professionals at TheDozyOwl.co.uk sought to find out which are the laziest countries around the world.

Which are the laziest countries in the world? 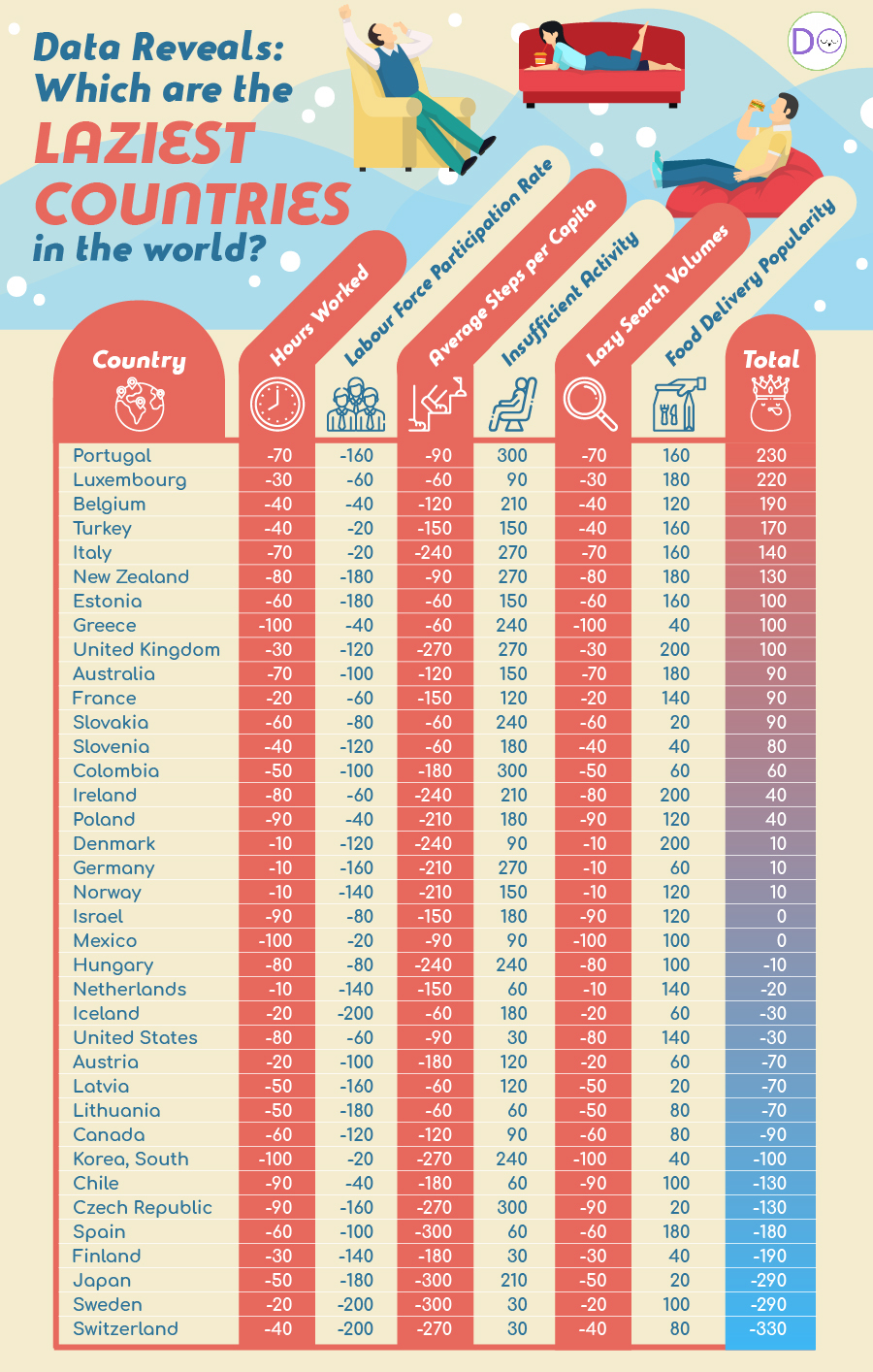 If you enjoy taking things easy, perhaps the country for you is Portugal, scoring the highest number of points in the ‘lazy’ index (230). The country was given the highest points for Insufficient Activity and it scored some of the highest points for Labour Force Participation Rate and Food Delivery Popularity, based on its population. The highest scores were given to the places within the top 10% of that sample size.

Based on that methodology, the countries scoring the least Hours Worked are Denmark, Germany, Norway, and the Netherlands with 10 points each. Perhaps this is no surprise as the countries mentioned above are known for working for less time but more efficiently, putting a better price on happiness than anything else!

When it comes to Insufficient Activity, the countries ranking the highest are Portugal, Colombia, and the Czech Republic with 300 index points each. At the other end of the scale, the most active countries are the United States, Finland, Sweden, and Switzerland.

As you can see, Hungary is somewhere in the middle field even though we did not do very good in Insufficient Activity and Food Delivery Popularity. It seems like Avergae Steps per Capita is our biggest strength.

The countries with the highest search volumes for ‘lazy’ related keywords

As part of the study, TheDozyOwl.co.uk looked at Google search volumes for the following keywords: ‘why can’t I wake up’, ‘lounger to buy’, ‘lounger’, ‘tips to feel more awake’, ‘how to get out of work’, ‘how to work less’, ‘easy jobs’ and ‘takeout food’.

The countries with the highest volume of lazy searches are Denmark, Germany, Norway, and the Netherlands, scoring -10 points each.

Why cook when you can order?

When it comes to food delivery popularity, the countries that prefer ordering to cooking the most are The United Kingdom, Ireland, and Denmark, scoring 200 index points each!

Which are the least lazy countries?