As part of the World Meeting, a world village was built in Budapest in the Lurdy Event Centre where art, science, culture and business became mixed, and visitors could spend time in a really good, festival-like atmosphere, globoport.hu writes.

In the Magyarsághíd room (“bridge of Hungarians”) visitors could get a glimpse of Latin America through Hungarians who are either living there or are frequently visiting the region. Szabolcs Kutasi, Trade Promotion Manager of HTTC (Hungarian Trade and Cultural Center) has talked about the results and plans of the organization. The talk’s host was Balázs Bokor.

The Hungarian Trade and Cultural Center (HTCC) is one of the world meeting’s main sponsors. During the talks, 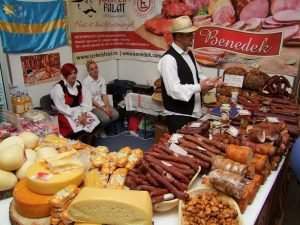 guests were informed about the Center’s plans in Latin America. The talk was hosted by Ambassador Balázs Bokor, president of the Panorama World Club of Hungarians business forum.

Szabolcs Kutasi said that the Centre is opening a HTTC house in Mexico in June which aims to deepen the cultural, touristic, and business relations of the two continents. The organization can provide help in getting to know the target country and the possible business opportunities in the region, and serves as a bridge between Europe and Latin America.

Establishing the first HTCC house in the region can lead to more opportunities, Kutasi said, and they are planning to reach out to several neighbouring countries.