Sofia (MTI) – Linking electricity grids, diversifying gas imports, Bulgaria’s accession to the Schengen zone and migration stood in the focus of talks between presidents Janos Ader of Hungary and Rosen Plevneliev of Bulgaria in Sofia on Tuesday.

At a joint press conference, Ader said that the two countries should jointly consider options during the institutional reforms of the European Union.

The president added that he saw especially good chances for cooperation in agriculture.

Ader said that Hungary, Slovakia and the Czech Republic had made progress in linking their electricity grids, and that Bulgaria and Romania had indicated their intention to join.

Asked about the planned South Stream gas pipeline, Ader said that it would only be one option for the diversification of gas supply. He said that the pipeline would enable Bulgaria, Hungary, Austria and Serbia to get natural gas even if the Ukrainian crisis were protracted.

Ader said that Hungary also advocates extending the Schengen system to Bulgaria. He called it a common interest to cope with the flood of refugees to Europe. 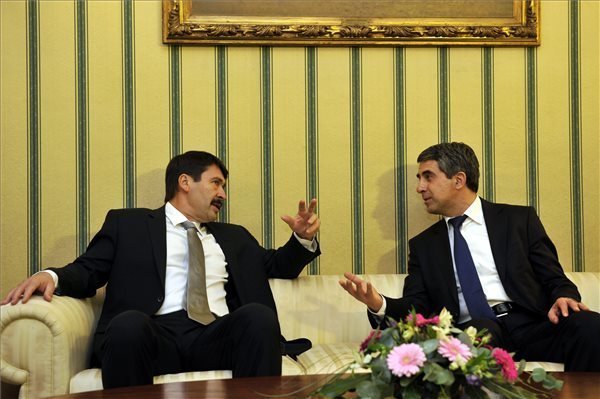 The president called it a psychological milestone that annual bilateral trade had surpassed one billion euros.

Plevneliev underlined the importance of Visegrad Four partnership, and expressed the wish of Bulgaria joining the group.

He said that there was a consensus in Bulgaria about the necessity of the planned South Stream gas pipeline. However, there are two criteria that should be met: the project must be brought in line with European standards and the investment should be recovered.

Budapest economy European Union Fidesz Government History Hungary migration Ministry of Foreign Affairs tourism Viktor Orbán
Corruption has become part of the system, not a side effect of it, according to…

The European Investment Bank (EIB) has a major role in mobilising European Union…
The mayor of Debrecen has welcomed the government's recent decision to move the…
Budapest's mayor, Gergely Karácsony, has defended his administration's decision to…
We and our partners use technologies, such as cookies, and collect browsing data to give you the best online experience and to personalise the content and advertising shown to you. I accept
Privacy & Cookies Policy