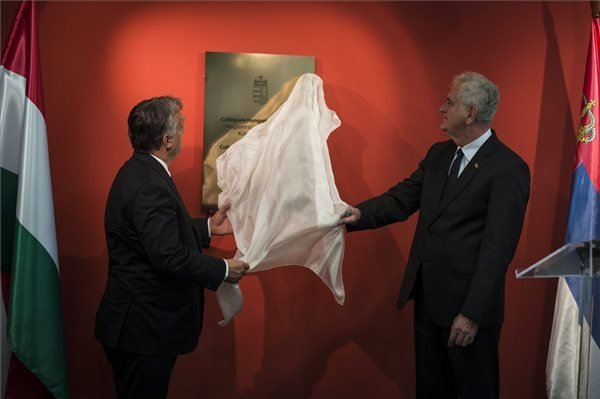 In a speech at the ceremony, Orban said Belgrade is Europe’s gateway to the Balkans, and the European Union cannot do without Serbia and Belgrade because “this would be like putting this gate beyond the fence that you want to get through.”

He emphasised that the Hungarian government supports Serbia’s EU accession as a matter of principle and out of a “moral duty”. Doing so is in Hungary’s own interest, too, since “we will truly feel secure only if every one of our neighbours belongs to the EU.”

“We would like every nation to be able to preserve its own identity as part of a unified European culture,” he said. A Europe should be created in which every individual and every nation feels at home, he added.

Addressing the event, the Serbian president called the new Hungarian Institute further proof that the two nations were developing and building bilateral cooperation. He said it was reassuring that dialogue between Serbia and Hungary over the past two years had become more intensive.

In the afternoon, a Serbian-Hungarian government summit will be held with the participation of Orban, Tibor Navracsics, the foreign minister, Sandor Pinter, the interior minister, Csaba Hende, the defence minister, and Miklos Sesztak, the national development minister.