Hungarian League, Round 3: Újpest and Debrecen post maiden wins of the new season

Újpest and Debrecen claimed their first wins of the season while two teams kept their 100% winning records intact. Here, we round up all the weekend’s action in NBI.

Two own goals within the space of three second-half minutes were the extraordinary feature of this weekend’s fixture in Sopron, the temporary home of Szombathelyi Haladás who entertained Budapest Honvéd on Saturday. Little of note had happened before Honvéd defender Ádám Hajdú beat Barnabás Rácz to Haladás winger Péter Halmosi’s cross in the 74th minute, only to succeed in diverting the ball into his own goal. Two minutes later though, fortunes were reversed when Botond Baráth’s shot took a huge deflection off Pedrag Bosnjak to level the scores. Haladás pushed for the winner in the final 14 minutes but they couldn’t find their way through and so the result remained 1-1. 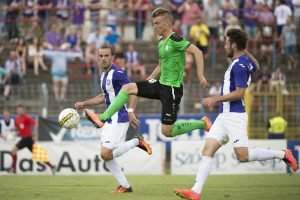 At the same time on Saturday, Budapest giants Újpest won their first match of the season at the third attempt thanks to János Lázok’s header in off the left post from Mohl’s long attacking throw. Thereafter it was mainly the hosts who threatened to mark the scoresheet again, Andrics missing the best chance of the match in the second half, but neither they nor Paks were successful in finding the net and so it was the 20-time Hungarian champions who took all three points.

Saturday’s late game turned into a goal-fest at the Groupama Aréna, leaders Ferencváros thrashing an in-form Diosgyőr 6-2 to maintain their 100% record so far this campaign. German midfielder Florian Trinks opened the scoring in the 33rd minute with a 20-metre effort into the bottom-left corner of the net following Marco Djuricin’s left-wing cross. Leandro’s 51-minute free-kick extended Fradi’s lead and that opened the floodgates, four more goals coming for the hosts in the remaining time courtesy of Djuricin twice, Emir Dilaver and veteran playmaker Zoltán Gera. Former Ferencváros forward Ferenc Horváth is in charge of Diosgyőr and he will at least be glad to see his team show some spirit towards the end, Diego Vela and Márk Tamás registering in the last 12 minutes to at least give a semblance of respectability to the final score of 6-2.

Level with Fradi at the top of the table is Vasas who continued their fabulous early-season form with a 2-1 away victory over Videoton – their third win in a row and one which keeps their three-match winning run going. All the goals were scored in the second half, Vasas opening up a two-goal lead thanks to to Zsolt Korcsmár’s unstoppable header following a short corner and Yevgeni Pavlov’s neat touch into the net from Ádám Martin’s right-wing cross. Videoton had suffered the loss of key player Asmir Suljic to injury earlier in the game but pulled back a late, late goal through Vinicius’s header in the 93rd minute but there was no time to notch an unlikely equaliser so Vasas took the three points, thereby completing a neat set of three wins over Hungary’s three Europa League representatives in their first three fixtures of the season.

One of those other teams vanquished by Vasas is Debrecen and they finally kickstarted their season in their first game under returning head coach András Herczeg. The championship-winning coach with Loki in 2009 and 2010 brought Krisztián Kuti and Ognjen Djelmic into the starting lineup against newboys Gyirmót and was rewarded early on when the duo combined for Zsolt Horváth to find the net at the second attempt. Left-back Mihály Korhut extended the lead five minutes later with a shot into the top-right corner of the net from a half-cleared corner and Tibor Tisza made it 3-0 just before the hour mark with some clever trickery and a powerful shot. Young striker Tamás Takács completed the scoring in the 69th minute with a superb 30-metre drive to leave the final score at 4-0 to Debrecen.

Meanwhile, Mezőkövesd sprang a surprise over more illustrious opponents MTK by emerging with a single-goal victory in the Budapest club’s temporary home of Dunaújváros. The newly-promoted team had to endure an early scare when Ádám Vass hit the woodwork with a long-distance drive but they took the lead just before the hour mark when Tarmo Kink converted a left-wing cross from five metres out. Attila Pintér’s team held out comfortably to remain unbeaten so far this season in the course of posting their first win.