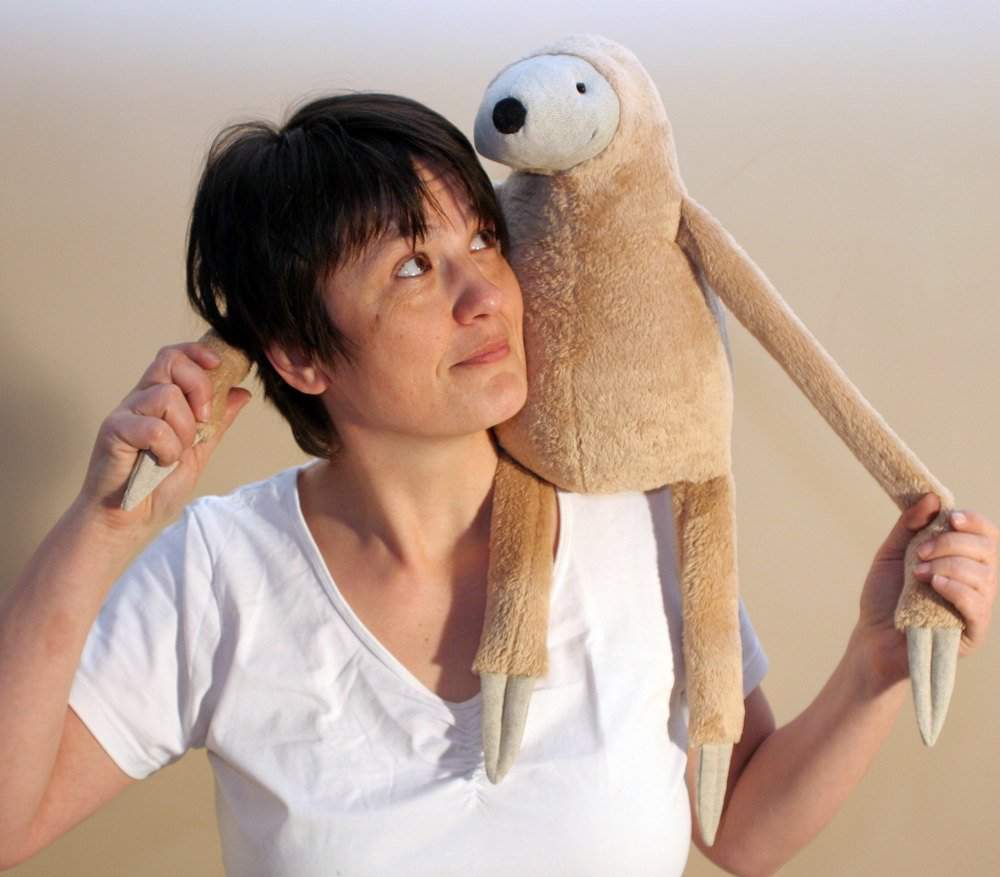 Forbes.hu wrote about a Hungarian mother, Andrea Vida, who has a real dream work. Her hobby became the main source of her family’s living. Back then, when her present work was just her hobby, she worked as a programmer. She has a Mathematics-Art teacher degree, but she never taught.

Andrea told Forbes.hu that it all begun with a plush sloth that she sold on Etsy, where once she received a message: a customer ordered six units in bigger sizes, so that the plushies could be well seen in a movie. The six sloths were sewn. It turned out that they would have a role in an American movie called A Merry Friggin’ Christmas: they were going to be torn. The property master ordered six units, so that there would be more unhurt units for more scenes. Finally, the plush sloths did not receive any role in the movie, but they could be seen for some seconds in the main character’s, a boy’s lap.

The crew grew to love the plush figures so much that after the shooting they ordered 200 units for a crew party which they wanted to keep a week later. Andrea responded that she knows that this could be her life’s opportunity, but she is not able to undertake to sew 200 units in one week; so they agreed on 100 units to be sewn in one month. The webshop was closed for that month and the whole family was sewing plush sloths. Today, sewing plush figures became Andrea’s full-time job with two needlewomen and occasional outside workers helping her. They sell approximately 2000 units a year, Andrea told Forbes.hu

This kind of private business can not be managed while having another full-time job. The family business is now being in its start-up period, and they estimate AVida Toys to operate with six or five employees in the end. They did not have any start-up capital; they could invest only their own profit. Their first product was a chicken, but the fox was also popular. Besides, dogs and sloths were in high demand. They have more than sixty products, including grasshoppers, flies, bees, vinegar fly, spider, common puffin, toucans, penguins, pelicans, crows, rodents, amphibians, and reptiles. They do not have many on stock; they rather prepare them by order.

They sell the figures mainly on Etsy, the global market for handicraft products, and the major part of their customers are Americans (mainly grannies). But they have customers around the whole world, for instance, in Germany, Austria, even in the United Arab Emirates. They have two small shops in Budapest, too (Artushka and LePetit Design), but they have retailers, as well.

Recently, a large commercial agency (Fred & Fraid) has ordered sea animals for their societal campaign. The campaign protests against the pollution of seas, therefore, their plush toys shall have a zipper on their stomach so that plush and hand-sewn marine litters could be taken out of them.

And what makes the figures so adorable and marketable? The unique forms, the figures, the high-quality materials, attentiveness and, of course, devotion.

Find the trailer of A Merry Friggin’ Christmas here