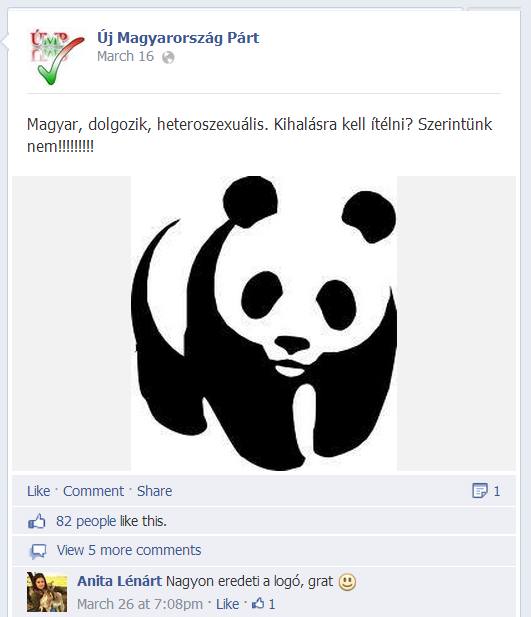 WWF is planning legal actions because Új Magyarország Párt (ÚMP) uses the conservation civil organization’s panda logo in their campaign. The party has used the trademark in a homophobic Facebook post as well, hvg.hu reports.

“Using the WWF’s panda logo by ÚMP in their campaign endangers the civil organization’s universally positive judgment” claimed WFF, and added that their Hungarian management was shocked to be informed about the unauthorized application of the trademark.

According to WWF’s information the ÚMP used the panda in their Facebook page and on placards primarily in Szombathely so far. “Hence we’re going to take legal steps against the unlawful, political application of the WWF logo, preventing further infringements” – as Fáth Ákos, the organization’s Hungarian manager said in the WWF’s announcement.

The logo is legally protected worldwide, its application is only the organization’s right, as WWF states.

ÚMP wrote the following in their post with the panda: “Hungarian, employed, heterosexual – doomed to extinction? No! Új Magyarország Párt”. The party has advertised itself on Facebook with another panda too, but it is not similar to the WWF’s logo.

“Not only we find unlawful and outrageous that anyone applies an emblem of an organization fighting for the conservation of nature to propagate extremist, exclusionary ideologies, but the unethical application of our trademark damages the WWF’s universally positive judgment and our reputation as well.” – said Fáth Ákos.

“It is particularly crucial to a civil organization which supports itself from donations, and means an unequivocal danger to our operation.” – he added.

Hvg.hu says that the goal of ÚMP, which was established in 2013, is “to hold a mirror to the present-day public figures”. Its program is summarized in three points on their website: do not litter, do not waste, and always ask for a receipt. Since they have set 50 individual candidates in Budapest and 16 county, they now have a national list.

ÚMP was associated to Zuschlag János in the press as well. However, Racker Béla, the party’s communications manager said in Kossuth Radio in the middle of March that “Zuschlag doesn’t participate in the party’s activity, though a member of the party consulted with him about the foundation of the party previously”.

based on article of hvg.hu
by Zsófia Luca Szemes