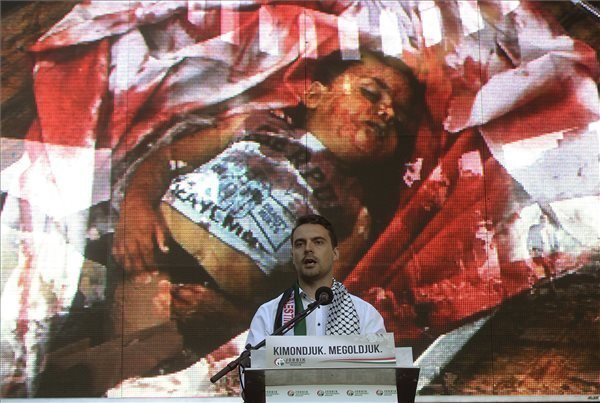 Vona who had a keffiyeh in his neck said in front of the Israeli embassy that the party would submit a resolution to parliament about this before the end of the week. Jobbik will contact the leaders of “European national parties” in the next few days and ask them to support Palestinians. He said he was especially looking forward to reactions from the Freedom Party of Austria and the National Front of France that could prove wrong the rumours that they “sold their souls to the baby murderer Israeli state.” Vona reiterated his call for Hungarians to boycott products from Israel.

He criticised civil organisations, Christian churches and public personalities for failing to stand up in protection of Palestinians. He added that when retired chief Rabbi Jozsef Schweitzer was verbally insulted in Budapest, President Janos Ader personally contacted him to apologise. Ader should now “call the Israeli ambassador, summon him to Sandor Palace and tell him that he had 24 hours to pack up and leave this country because we do not tolerate such a person here,” Vona said.

The demonstration at the Israeli embassy attracted a few hundred participants and they later moved to the Palestinian embassy where a few dozens of counter-demonstrators were waving Israeli flags.

At the Palestinian embassy Ambassador Marie Antoinette Sedin said the conflict in Gaza could not be ended by ceasefire only by the end of Israeli occupation.