In July 2013, industrial output gained 4.8 percent in comparison to the corresponding period of 2012. This figure places Hungary as the fifth best on the growth ranking of the EU 28.

The success of the Hungarian economy depends largely on the success of the productive sector, and that is why the Government of Hungary has been pursuing a proactive industrial policy ever since it took office. The Government measures aimed at boosting competitiveness, investment and industrial production have contributed to the excellent data in July, through which Hungary belongs to the top performers within the European Union.

According to data of the Hungarian Central Statistical Office (KSH) for July, industrial output exceeded by 4.8 percent the level of one year ago, and it is an outstanding figure for the past months. Working day adjusted data signal an increase of 2.5 percent. In comparison to June, the seasonally and working day adjusted industrial production index was also up by 0.3 percent, and thus – with the exception of one month – the sector expanded in the entire year. As far as regions are concerned, industrial output increased in two of them year-on-year – Southern Great Plain (25.1 percent) and Northern Hungary (4.7 percent) – in January-July 2013. 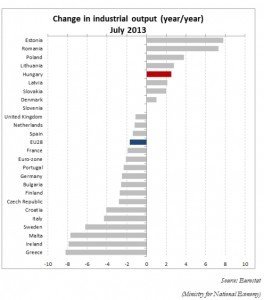 Industrial exports in the initial seven months of the year and compared to the same period in 2012 were 2.2 percent and 7.2 percent higher, respectively. Exports of vehicle manufacturing products, which constitute some one-third of total manufacturing industry exports, were up by 14.3 percent in July.

The Eurostat also published a report on July industrial output data for the EU 28. In light of that, Hungary is among top performers, as only four out of twenty-eight member states recorded a better figure than Hungary within the European Union, and only eight of them posted growth- no data available for Austria, Belgium, Cyprus and Luxembourg. The rapid increase of industrial output confirms the effectiveness of Government efforts designed to turn the industrial sector into the growth engine of the Hungarian economy.