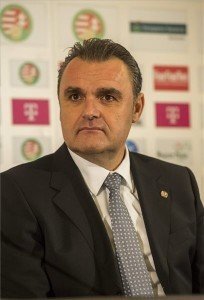 His predecessor, Sandor Egervari, resigned after more than three years, on Oct. 11, when the Hungarian team suffered a devastating 1:8 defeat against the Netherlands in a World Cup qualifier and failed to make its way to the final tournament to be held in Brazil next year.

Pinter, 47, has so far coached Gyor, the reigning champion, and previously led Ferencvaros to victory in the national championship.

He is the 50th coach of the Hungarian national eleven.