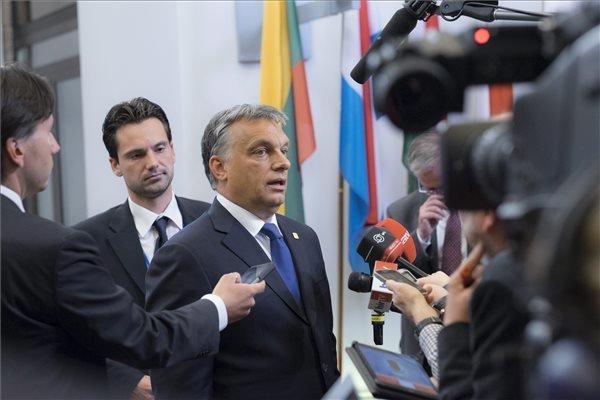 (MTI) – Hungary needed to give the European Union a powerful signal that it rejects the community’s taking over national competencies, and its “surreptitious” changing of the EU Treaty, Prime Minister Viktor Orban said in reference to his voting against the nomination of Jean-Claude Juncker for European Commission president, in Brussels on Friday.

In the vote, Orban and his British counterpart David Cameron voted against Juncker, but Orban said afterwards he would have voted the same way even if he had been left alone with his position.

“It was a matter of principle,” Orban said.

Orban voiced his opposition against “transgressing the boundaries of the EU Treaty even if that is done with the otherwise honourable endeavour for consensus”.

If the EU Treaty fails to provide a sufficient room for manoeuvring and new rules are required, the idea should be raised and discussed. The EU Treaty can be amended in a “transparent, democratic, well-prepared and deliberate way” but it is incorrect if some interpretations lead to deviations from the original purposes of the Treaty, he said.

Orban noted that over the past five years there had been repeated efforts to extend EU control over issues that unambiguously fall within national scope, mentioning cuts in public utility bills, the banking levy, protection of arable land and even tax-free palinka distillation as examples.

Orban said Hungary could enforce its position during the discussion of a five-year EU strategy on several points.

For instance, the need to cut labour taxes, an idea that evoked sharp criticism previously, was clearly backed during the summit, he said.

There has been certain shift on the issue of competitive energy prices, he said.

According to Hungary’s “radical position shared by some member states, even if not all”, regulating the market is not an objective by itself; competition should result in quality services and lower prices for consumers. In the energy sector, however, the case is not like that. It should therefore be considered whether priority should be given to the principles of regulation or to consumer interests, he said.

Parties of the Hungarian leftist opposition, however, welcomed Juncker’s nomination and criticised Orban for voting against him.

Interim Socialist group leader Jozsef Tobias told MTI that Orban had found himself standing against the vast majority of member states and “suffered a spectacular defeat”. Tobias said Juncker’s programme was in line with Hungary’s interests, while “Orban failed to represent Hungarian interests and his attitude further increased the country’s isolation and the negative image Hungary has gained since 2010”.

The Democratic Coalition supports Juncker as an “experienced politician of great respect… someone committed to Europe’s competitiveness and the welfare of its citizens”.

Acting vice chair Csaba Molnar said that his party expected Juncker to work to protect Hungary’s democracy and its people “even against the government of Viktor Orban”.

A statement from the E-PM party alliance referred to Juncker as a “European politician who represents Hungary’s interests better than the country’s prime minister does”. The document voiced E-PM’s support for a “more federal Europe, free labour market and the fight against poverty” and voiced incomprehension at Orban’s “obstinate” rejection of Juncker, an attitude “not justified by any Hungarian interest”.