One of the most eagerly awaited event of the 17th FINA Masters World Championships will be the water polo 40+ tournament. This category will feature several players of the legendary golden water polo team of Hungary, including three, two and one-time Olympic champions. The motivation is already high, the experience will most definitely be remarkable in the water and in the stands alike.

Shortly after the agreement was signed on Budapest hosting the 2017 FINA World Championships and the following Masters World Championships the eyes of Tamás Kásás, three-time Olympic champion alighted. The legendary water polo player -member of the national team earning the Olympic champion title in 2000, 2004 and 2008- is the only member of the previous team who is not engaged in this discipline any more hence it is even more surprising that he was the one to initiate the reunion of the „good old team”.

Sometimes we could see some occasions when they played together again, they last reunited in 2016 autumn for the farewell gala match of Péter Biros in Eger. Back then they all knew that they would soon be preparing for a new challenge. The previous months have seen intense communication and enthusiastic preparation by the team.

Here is the list of players who have registered for the Masters WCH so far:

Tamás Märcz will definitely have a busy summer as he is the head coach of the hosting national team preparing for the elite world championships and afterwards he will enter the pool as a member of the team called Millenium in the Masters.

„We have been dealing with this opportunity for months, so it did not just bounce off our heads. We had several reasons to enter the tournament, the most important thing is that Budapest is to host the Masters WCH so we can play again in front of our own audience. For another thing, we are now part of the 40+ age group, we have matured. Gala matches we have played together lately have also given us a boost. These include for instance the gala in Eger or Debrecen, organised by Tamás Varga earlier. These are nice experiences from the recent past. Although most of us are not active players any more, it was not so long ago when we were, so we can get back in shape relatively fast” – said the center player of the squad claiming gold in Sydney.

As a matter of fact, from the list above it is only Gergely Kiss, who is still an active player, Barnabás Steinmetz played in Honvéd team back in the early season while Zoltán Szécsi enter the pool every now and then as the player-coach of Kaposvár to prove his skills as a goalie – all the others have retired from the sport already.

„This tournament will have a sort of farewell character to it, since the team retired we have not played a match in Budapest with this squad. Personally I have been training to stay in shape ever since, but today I have started wet trainings in BVSC. We cannot afford to enter the tournament unprepared, in addition, we have always aimed at doing our best in the pool. Until we start training together, we motivate one another by sharing our training experiences. No one wants to miss out on this opportunity as we all want to gain some good experience” –Tamás Märcz added. 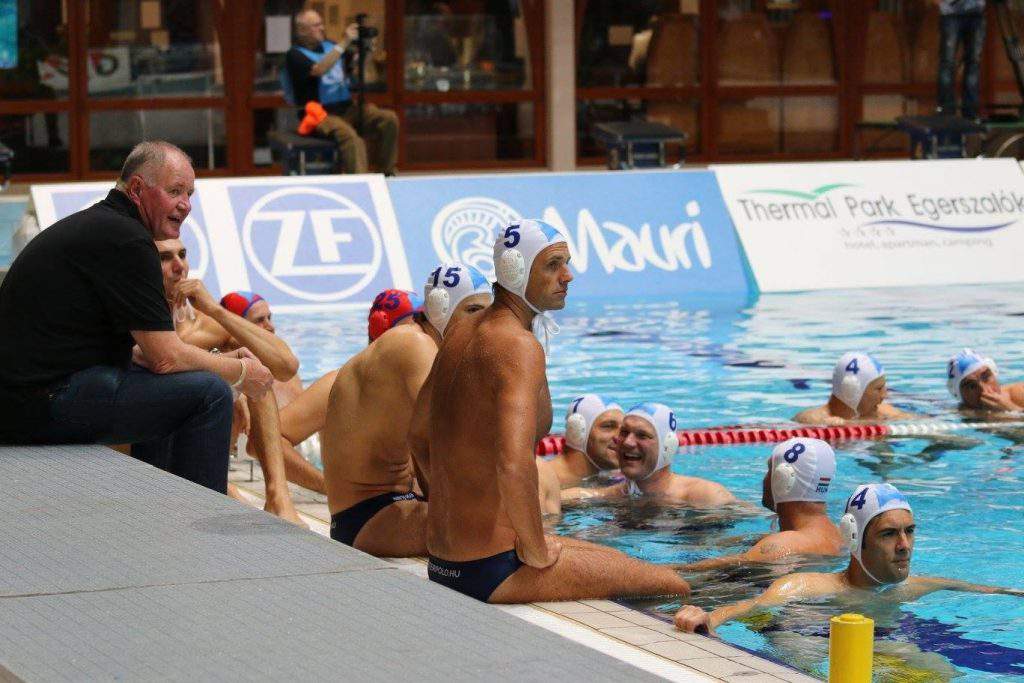 „This is actually an ultra last opportunity for us all, who won Olympic and world champion titles and collected some precious metals together, to reunite. I owe a lot to these players and I can’t wait to fight for a common goal again. It will be quite interesting to play together again, to take the positions with a more mature mindset and extensive experience. The mere fact that we can enter an official event once more is a great opportunity and a big challenge” – said István Gergely, working as the managing director of Budapest Honvéd currently.

„I don’t really feel like a 40+ but reading or coming across this number has a certain weight. I keep fit to stay healthy but I haven’t been engaged in swimming or water polo for a while. I have been playing basketball, boxing and working out but now I need to change my trainings. I am planning to start swimming again in May and I will slowly get back on track. I expect some great community experiences I look forward to seeing the old fire light up in us, just like in each world championship before, helping us to succeed. Obviously, our goal is victory, it would be rather weird to lower our expectations to ourselves in a team where the entry ticket is an Olympic champion title” – said István Gergely.

There is a huge interest in the Masters (more than 7000 athletes have registered so far) hence in the water polo tournament, as well. According to the latest information some members of the Russian team (2004 Olympic bronze squad) playing Hungary in the final and claiming a silver in Sydney may participate in the tournament thus the Masters tournament in Hajós Alfréd Swimming Stadium on Margaret island may see the partial repeat of the 2000 Olympic final.

Tickets are now available! Click here to get your own ticket!