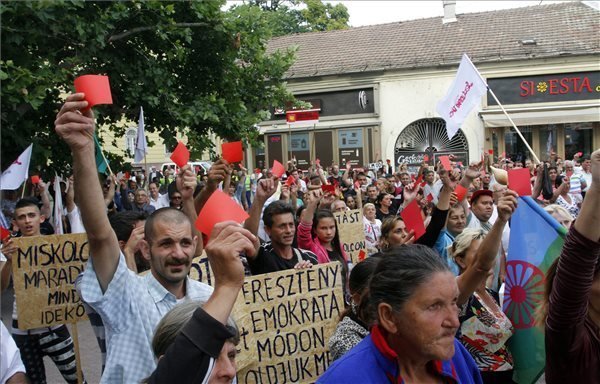 Budapest, June 25 (MTI) – Some 200 Roma and non-Roma people joined a demonstration organised by the local Roma self-government in Miskolc, northeast Hungary, in protest against a local council decree on the elimination of slums on the city’s outskirts on Wednesday afternoon.

The city council approved in May a decree sponsored by the ruling Fidesz-KDNP on dismantling the north-eastern Hungarian city’s “ghettos and slums” with the aim of making the city safer and more liveable.

Under the decree, the city council offers tenants of buildings regarded unsuitable for human habitation 1.5-2 million forints (EUR 4,900-6,500) to help them purchase better homes outside the city.

The local Roma community said the decree is discriminative and it saw “a real threat” in reactions it triggered, namely that several other towns and cities in the area in Borsod County made strong statements rejecting the affected inhabitants of Miskolc.

Gabor Varadi, the president of the Miskolc Roma self-government, announced today’s demonstration last week and said they had asked for Prime Minister Viktor’s intervention in ensuring that the city council should seek to resolve the issue in cooperation with the Roma and not against them.

Wednesday’s demonstration was joined by the Roma branch of the leftist Hungarian Solidarity Movement. They called it unacceptable that the council of Miskolc wants to resolve the issue of poverty, unemployment and lack of equal opportunities by means of a “paid-for removal” of residents.

The opposition Democratic Coalition told MTI in a statement that Miskolc has an anti-segregation plan drafted in 2008. It clearly identifies the problematic neighbourhoods and defines how these should be eliminated and alternative housing ensured to affected inhabitants, DK noted.

DK said that about 200 families live in these neighbourhoods where some of the homes had to be dismantled to give way to the construction of a local sports stadium. It added that the city does not seem to have 400 million forints (EUR 1.3m) available in its budget to pay for the move.

The radical nationalist Jobbik party have protested against the move with a signature drive, as in their opinion, the council should not pay for people who have “ruined their council homes”. The slums could be emptied at no cost, and it is the city’s legal duty to make this happen, the party said.

The European Roma Rights Centre (ERRC), an international Roma rights organisation, said in a release on Wednesday that it was deeply concerned about the decree and turned to the European Commission.

The ERRC said that it sent its legal analysis to the commission to underline the decree’s unlawfulness, urging it to take action against Hungary as its local decree is in breach of EU law.

It said that it has urged the commission to remind the Hungarian authorities to adhere to their obligations and take steps to stop these violations of fundamental rights.

“The Commission should call on Hungary to nullify the decree, and if necessary, start infringement proceedings for this breach of EU law,” the ERRC said.