Orban calls on supporters not to divide their votes 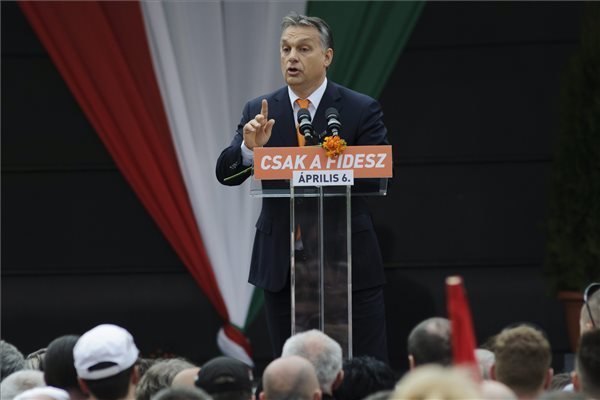 Budapest, April 5 (MTI) – Prime Minister Viktor Orban, in an interview published in Saturday’s daily Magyar Nemzet, urged all supporters of his ruling Fidesz party to go to the polls on Sunday.

In response to a question about what he considered the most important first steps to be taken if Fidesz wins the election, he said ongoing disputes between Hungary and the European Union concerning the land law and the cuts to public utility fees would intensify around May, and measures would also need to be taken in response to a top court decision expected on mortgage debt in foreign currency.

“Once the court makes its decision, we will immediately make a move and help out every single family…” Orban said.

He said the main left-wing opposition and radical nationalist Jobbik were Fidesz’s main political opponents, adding that the Socialists, if they got the chance to govern again, would repeat their past performance.

Focusing on power is engrained in the left’s way of thinking, he said. Voters gave the Socialists a chance in 2010 to reflect on their mistakes but they have failed to learn from them in the meantime, Orban added.

He condemned Jobbik for campaigning for Hungary’s exit from the European Union.

“The relationship between the EU and our country is not a love affair … This institution does not need to be loved … but we should not throw away our common sense, and we must not bash our heads against the wall, as Jobbik would like to,” he said.

“My political credo is focused on community building. I first built Fidesz’s radical, small-party community to change the regime, then a large civic party and a national community with a right-wing sensitivity through the civic circles, and we are in government, I am building a national community that also incorporates the left-wing, and, by way of a programme that develops the nation’s unity, reaches beyond the borders of the country,” Orban said.