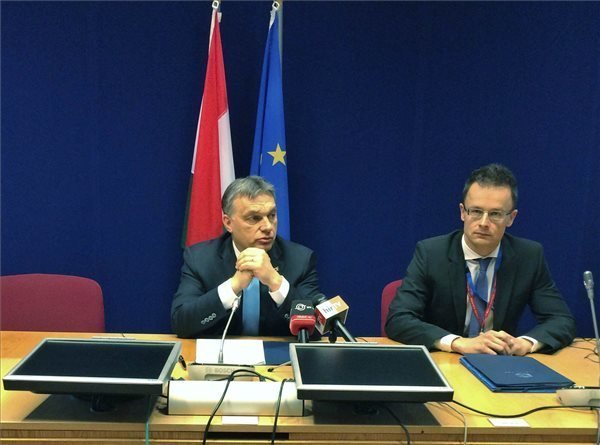 For Hungary the issue of minority policy is crucial, and Ukraine is expected to observe regional and ethnic particularities when drafting its constitution, as well as “demonstrating power” against extremists, Orban told a news conference after the EU heads of state and government held a two-day summit.

Orban noted that leaders of member states delineated requirements of Ukraine and decided on expanding sanctions against Russia.

The statement agreed on at the summit most emphatically stands up for the rights of minorities and calls on the Ukrainian government to take into consideration the protection of territorial and linguistic diversity with due weight in the constitutional process, and face up to extremists who take action against minorities, Orban noted.

Hungary would not have signed the political part of Ukraine’s association agreement with the EU on Friday had the country really scrapped its language law that lets national minorities use their mother tongue, Orban said.

He made clear that Hungary had already indicated that it does not only regard the measure as mistaken, but illegitimate and unlawful, Orban said.

On February 23 Ukraine’s parliament scrapped the language law but the acting president, Alexander Turchynov, has refused to sign it.

In connection with measures taken against Russia, he said the EU had not stepped significantly beyond the initial second stage of sanctions — in other words, it had not decided on economic prohibitive measures. Following the current expansion, the visa ban and asset freeze against officials includes 33 names, he noted. Further, bilateral meetings have been cancelled, he added.

Orban noted that Ukraine was currently in a very difficult situation. The economic underpinnings of the state were questionable, and amid such circumstances the correct policy, as far as the EU is concerned, is to stand by Ukraine, he said. He characterised a demand by the International Monetary Fund for Ukraine to raise energy prices by a major amount as a “technocratic approach”.

The prime minister noted that the gas interconnector between Slovakia and Hungary, funded by the EU, would be inaugurated on March 27. This allows the chance for Hungary, by hooking up the Slovak-Czech link, to have access to north-European — namely non-Russian — gas supplies. He noted that the economics of the situation came to the fore in certain situations such as the one which has emerged in Ukraine, as do the energy security aspects.

Noting that other issues besides Ukraine had been debated at the summit, Orban said that the key question in terms of Europe’s future competitiveness was the price of energy. In this context, the prime minister gave an account of measures taken in Hungary to cut the price of household energy as well as plans to make further cuts to encompass industry, too.

Orban said Hungary stood together with other members of the Visegrad Group and the UK in supporting the development of nuclear power equally alongside renewables.