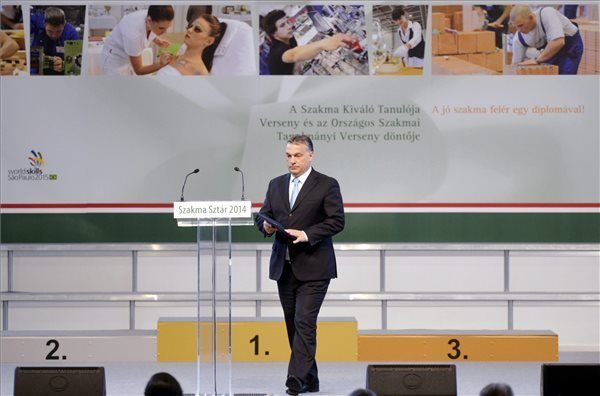 Budapest, April 16 (MTI) – In the April 6 general election, voters said “yes” to the government’s new economic policy, whose goal is to build an economy on the foundations of “labour rather than speculation”, Prime Minister Viktor Orban said today.

Evaluating the election held ten days ago, Orban said at a student competition event held in Budapest that the government had chosen the right path when it opted for the dual vocational training system based on the German model.

“The really good news is that this path, this policy, is on a secure road in the future … we can carry on along this road for another four years,” he said.

He said the government was preparing to sign an agreement with the Hungarian Chamber of Commerce and Industry (MKIK) on turning several tens of billions of forints towards developing the vocational education system in the 2014-2020 period.

The prime minister thanked MKIK for its “consistent and committed” assistance to the government in its efforts aimed at building a work-based economy, “restoring the reputation of physical work” and revamping vocational training.

The government wants to make sure that vocational schools “increase the number of people living from their own labour rather than boosting the number of jobless”. Students of those institutions should be taught skills that really help them to gain employment later on, Orban said.

Hungary’s labour force is the competitive edge of the country, the prime minister said, adding that highly skilled people were needed to meet the goal of making Hungary a production centre in Europe.