Purples Against The Greens, The Greatest Hungarian Football Derby TODAY

The rivalry between Újpest FC and FTC was always a guarantee for a passionate and exciting game: the supporters on the stands battled each other just as intensively as the players played on the pitch.

Nevertheless, we can not really expect that to happen anymore. The supporters are still passionate and incredibly enthusiastic about the game, but they also quieter nowadays. Instead of battling each other, they just chant now, and occasionally try to invade the pitch, or throw things there, but nothing more serious.

Although both teams are among the most successful Hungarian clubs, both performs rather worse than that could be expected. This is not surprizing, if we take a look what happened to these teams recently. Without argument, they had a rough season so far.

For the hosting side from the north of Budapest it was even questionable if they can play against fTC (Fradi) anymore. As we have reported, Újpest was indebted, and as such, faced the threat of losing the license to play in the Hungarian first league (NB1). Fortunately, UTE could stay in the NB1 and now is able to play this derby.

Despite the success in the field of law, Újpest is not in a good form. From the last six matches, Ute only managed to win two, with two draws and lost games. However, this was still enough to move them up on the table: they are currently 9th in the league, with only five points behind Fradi.

Concerning the players, Újpest has only one banned player. Unfortunately, that player is Péter Kabát, the team’s experienced striker. He will miss the derby because he committed a very dangerous foul on the match against Diósgyőr. Although the referee did not notice it, the MLSZ subsequently banned him from two matches. This is not only bad news for UTE because Kabát is a good player with excellent shooting sills, but because he is a leader of men. His routine would have been very important for his team. 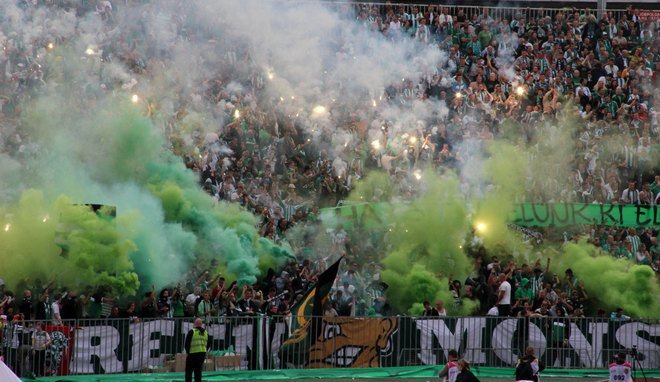 The green-whites are having a rough season as well. Their problem, however, is not a financial matter. Actually, the season for FTC started quite well. With Dutch manager Ricardo Moniz, Fradi won the Hungarian League Cup last season. Everyone trusted the manager and the team, everyone was looking forward for the season. From the first eight matches, FTC won 6, the two lost games were both away derbies against good teams like Videoton and Debrecen.

After that, something broke. It all started with the unfortunate heart attack of Akeem Adams, the Trinidadian back of FTC. Although he managed to recover, and showed good sings, the team performed rather hectically on the pitch. (Adams later suffered a cerebral haemorrhage and passed away). From the next eight match, Fradi only won one. This lead to the sack of Moniz. This time, the board of FTC chose a German manager, Thomas Doll.

His start was not a dream start either, after four rounds, he had three draws and one lose. However, last week FTC beat Pápa to 4-0, which can be a turning point for the team. Against the purple-whites, the greatest asset can be Leonardo, the Brazilian playmaker. He recovered from his last year injury and plays well. Dániel Böde is also a threat, he finally managed to break his goalless period against Pápa.

To predict the result of the match, it is very difficult. Both team play hectically, their form is nothing but consequent. The two teams last six match do not tell any decisive either: two Újpest win, two draws and two FTC win. The fact that Kabát is banned, Leonardo’s form is improving and Böde might start scoring would suggest that FTC has slightly better chance to win.

However, Újpest will play at home, in the Szusza Ferenc Stadium, and the team just escaped a serious threat. Nevertheless, the match will probably exciting and passionate, as these matches always have been.

The derby will start at 7 pm.

Based on the articles of hatharom.com, nemzetisport.hu, sportgeza.hu
The statistical details are from Wikipedia.org and whoscored.com