Reliquary in the Heart of Budapest – St. Stephen’s Basilica

Approaching from the adjacent streets, only minor details of the huge, imposing building can be seen. After a few steps, it stands in its full glory and enormous dimensions. On its steps, usually foreign-speaking crowds flow; and tiny-looking people are lined up at the edge of the dome to admire the view.

Late in the afternoon, there is an especially beautiful view: the rays of sunset gives a golden shine to the mosaic image at the entry.
Apart from its beauty, grandeur and monumentality, it is also famous for its long construction. Nearly 60 years of hardships had passed until it was built up. The work of three renowned architects, tenacious will, and unprecedented imagination were needed for the birth of this church.

The desire for a church strengthened at the middle of the 1800’s, when the newly built part of the city (next to the city centre) was named as Lipótváros, to commemorate the coronation of Leopold II. As locals craved for a church, a temporary one was erected in 1817, on the basis of János Zitterbarth’s plans. In 1838, during a devastating flood, it provided security for many. Today’s basilica is due to the people survived here: they vowed to build a large church in this place.

In 1845, József Hild was commissioned by the Pest City Council to build a massive domed church. In 1848, the works were stopped by the Hungarian Revolution, so the foundation stone was only set in October, 1851. The Basilica is the biggest church in Budapest, no wonder that due to the proximity of the Danube, three basement levels were needed. The citizens of Pest largely contributed to the cost of building. Among others, Ferenc Liszt donated a considerable amount of 200.000 crowns for this purpose.
After Hild’s death in 1867, Miklós Ybl was entrusted to conduct the construction. Hild’s neoclassical plans had to be redesigned: the giant pillars holding the huge dome started to sink; consequently, the walls broke apart and the dome collapsed. For the continuation of the works, 10 years had to pass. During this time, Ybl has redesigned the previous plans. The dome was put on new bases, the main facade was changed, and he created an image of a neo-Renaissance-style church. However, he could not live to see the completion of the Basilica. After his death in 1891, József Kauser was entrusted with the completion of the construction. Internal works took place entirely on the basis of his ideas, because Ybl left no information about it. 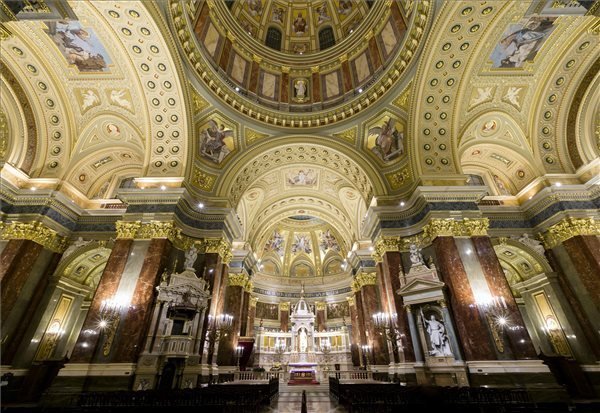 According to the original plans, the church would have had Saint Leopold’s name, as respect for the House of Habsburg. But due to Lenard Lollok’s intervention, from 1897, the building bears the name of St. Stephen. Since 1951, the most precious relic of the Christian Hungary is guarded in the Holy Right chapel: St. Stephen’s mummified right hand.

The designs and the decorative works of the inner world of the Basilica were undertaken by significant artists. The church was sanctified on November, 1905; however, its keystone was only placed behind the altar in December, 1906, in the presence of Emperor Franz Joseph I..

The huge size of the church becomes apparent when one enters the interior, covered with burgundy, black and white marbles, and precious stones. The splendor of the mosaic above the main altar stands out from the dark colours, and the shadows of the narrow, coloured glass windows. In the middle of the main altar, under a baldachin, stands the statue of St. Stephen, made from Carrara marble. The interior of the church is further enriched by sculptures, paintings and mosaics. 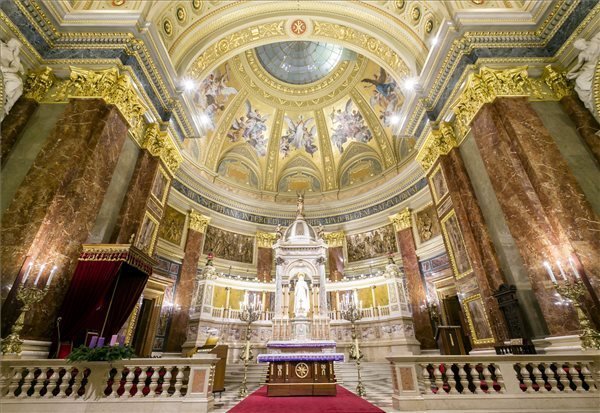 Interestingly, the arrangement of the Basilica is not typical: the layout is a Greek cross; therefore, architecturally it is not entitled to the name. It is true that the citizens of Pest called it a basilica immediately after the construction, but it only got the minor basilica rank in 1930, from Pope Pius XI.. 62 years later, in 1993, Pope John Paul II. gave it the co-cathedral rank of the archdiocese. It is especially interesting that the formerly state-owned building only became the property of the church in 2001.