The recent attacks in Paris were directed against all European Union countries, Orban said. He warned that “we must draw serious conclusions and face severe consequences.” The prime minister said that though Europe may be rich, it is weak, which he called a dangerous combination, and called for firm action to ensure security for the community.

Orban insisted that China has a key role in securing peace in the world and in maintaining a global balance. He asked China’s leaders “to support the European efforts aimed at restoring our security, and assist the European anti-terrorist efforts on all global political forums”. 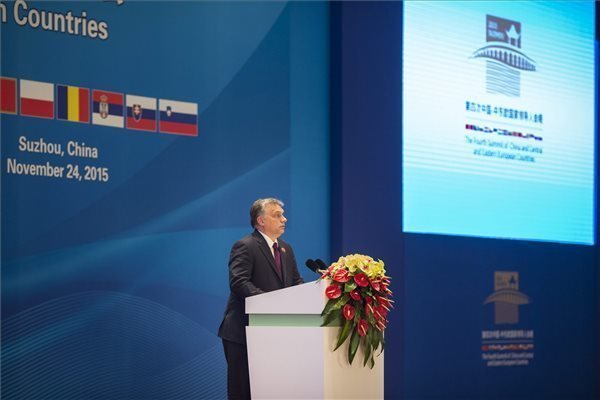 The prime minister praised the CEE-China cooperation launched in 2012 and noted earlier concerns that China’s economic prosperity could be transient.

“Yet today, we see the opposite. China is on the path of permanent and long-term development and we all know that it will soon become the strongest economy in the world,” Orban said, stressing that ties with China are based on “respect and mutual interests”.

Chinese businesses have so far invested over 3.5 billion dollars in Hungary, Orban said, adding that those investments yielded mutual benefits rather than a pressure on the country.

Bilateral ties with China have stood the test of time and have an enormous potential for the future, the prime minister said.