“It lies in Hungary’s interest to pursue pragmatic and successful cooperation based on respect for one another and for international law,” the minister told MTI after the ceremony.

Szijjarto reaffirmed Hungary’s interest in a quick and peaceful resolution to the crisis in Ukraine. He also said that Hungary has an interest in the revival of effective cooperation between eastern and western Europe.

The minister said the EU sanctions against Russia and the subsequent Russian embargo on some European deliveries had hit hard the European nations. Hungarian export to Russia, for instance, declined by 510 million dollars, or 15 percent, in 2014.

During the visit, the minister attended a session of the Hungarian-Russian economic mixed committee in which several agreements were concluded. He said the accords were aimed at boosting cooperation and counterbalancing losses due to sanctions in areas unaffected by the embargo.

The two sides held talks on energy supply and the storage of Russian gas in Hungarian facilities. 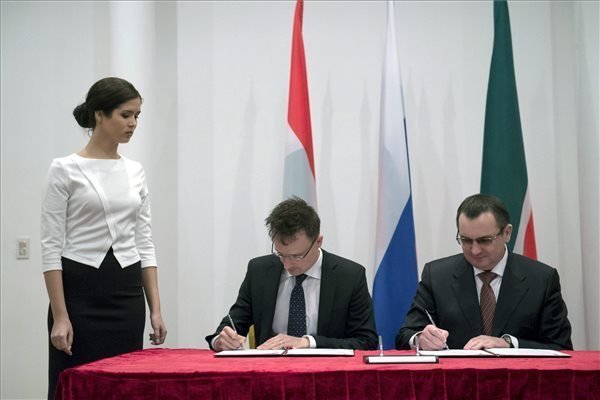 The Russian side expressed support for oil and gas company MOL increasing its prospecting and production capacities in Russia.

It was agreed that the Russian authorities would start the audit of 22 Hungarian meat companies later in April, enabling them to resume deliveries as soon as the sanctions and the embargo are lifted.

The Russian government said it was prepared to cooperate in helping pharmaceuticals company Richter staunch any further losses in the Russian market.

Under another agreement, Eximbank will open a representation office in Moscow to help Hungarian SMEs penetrate the Russian market with a USD 289 million credit line.

Hungary and the Republic of Tatarstan have signed an economic cooperation agreement.

Szijjarto announced that Wizzair would soon launch a direct flight between Budapest and Kazan.