A courageous ten-man Hungary team succumbed 1-0 to reigning European champions Portugal but the visitors certainly didn’t have things all their own way, despite enjoying a one-man advantage for more than two-thirds of this FIFA 2018 World Cup qualifying fixture in the Groupama Aréna in Budapest on Sunday evening.

Portugal striker André Silva scored the vital goal in the 48th minute to seal three points for his side who otherwise fail to breach a Hungary defence which had to mount a rearguard action for an hour after seeing Tamás Priskin dismissed for dangerous play in the 30th minute when his flailing arm struck Pepe in the face.

A great present from the Hungarian supporters

It had been a probing start to the match from both teams, Hungary forcing an early corner while for Portugal Ronaldo’s fierce shot was tipped over the crossbar by an alert Péter Gulácsi in the home team’s goal. Joao Mario’s shot from a half-cleared corner was deflected behind by Tamás Kádár, the set-piece eventaully yielding a heading opportunity for Ronaldo but he was inches off target with a back-post header ten metres from goal.

UEFA Euro 2016 winners Portugal were predictably the more dangerous of the two teams in the final third but Hungary showed intent too, Ákos Elek heading Balázs Dzsudzsák’s left-wing free-kick a few metres wide of the left post from just outside the Portugal penalty area. Nice combination play from Gergő Lovrencsics and Tamás Priskin then led to the latter pulling the ball back from the byline into a dangerous positino ten metres from goal but none of his teammates were on hand to place a shot on target. Back at the other end and there were plenty of shots for the Hungary backline to deal with, José Moutinho seeing two shots blocked and Danilo and Cedric firing wastefully over from good positions.

Portugal were forced into a 28th-minute change when a thigh injury saw Fabio Coentrao replaced by Eliseu but the first real drama followed soon after, a stray elbow from Priskin accidentally but dangerously landing on defender Pepe’s left eye socket as they prepared to contest a high ball and the referee deeming that to be enough to dismiss the experienced forward from the field of play.

If Portugal had largely dominated proceedings so far, that was nothing compared to the huge percentage of possession and territory the visitors enjoyed when facing only ten men. Nevertheless, a long through-ball released Lovrencsics on a diagonal run into the left side of the penalty area, the right-winger doing well to produce any sort of shot under pressure from three defenders, his scooped effort clearing the crossbar on this occasion. As half-time approached, the hosts were looking remarkably composed despite their numerical disadvantage and on the odd occasion Portugal did fashion a shooting chance, Gulácsi was there to save, as he did when André Silva caught a sight of goal from a tight angle seven metres from goal and Ronaldo unleashed a daisy-cutter from a central position 18 metres out. Hungary had done extremely well to remain level going into the half-time break.

Alas, parity wasn’t to last much longer. Portugal started the second period just as dominantly as they’d ended the first and when Moutinho slotted Ronaldo free down the left channel in the 48th minute the Real Madrid striker took the chance to loft a left-footed cross from the byline which took keeper Gulácsi out of the game and presented André Silva with the easiest chance he may ever have, a simple bundled finish from just a metre out despite Mihály Korhut’s valiant attempt to intercept.

Remarkably, Hungary nearly equalised the ball bounced off Eppel and popped up invitingly for Pátkai on the right side of the penalty but his low, sweetly-struck volley sailed just wide of the far left post. Hungary head coach Bernd Storck had clearly decided that the hour mark was the right time to start reinvigorating his lineup, Márton Eppel stepping aside for fellow striker Dániel Böde, the crowd enthused by seeing the Ferencváros forward appear in his club’s home stadium. Immediately, Hungary looked a little more ambition in attack, Dzsudzsák seeing a left-footed shot blocked 12 metres out and Böde unfortunately heading a left-wing cross out of the way of an arriving teammate.

Naturally, Fernando Santos’ star-studded side continued to enjoy plenty of the ball but a stoic Hungarian defence pressured their opponents incessantly and threw themselves into blocks whenever space for a Portuguese attempt at goal presented itself, Ronaldo suffering from such bravery when Attila Fiola diverted his powerful ten-metre shot over the bar just outside the left corner of the six-yard box. Hungary’s successful prevention of clear goalscoring opportunities for their guests meant the games had become a rather attritional affair but there was one last moment of excitement, an injury-time free-kick on the right wing for the hosts tempting goalkeeper Gulácsi forward to contest a cross which eventually landed on the head of Fiola, only for his header to bounce down with little power and fail to seriously test Portugal goalkeeeper Rui Patricio. His quick throw-out was gathered by substitute Ricardo Quaresma who tried to launch the ball into an empty Hungary net from his own half but the shot flew wide and thus the score remained 1-0 as the referee blew his final whistle.

Hungary’s next match is another World Cup qualifier, this time away at group leaders Switzerland on 7th October where they will aim to consolidate third position in group B, qualification for next year’s finals now beyond them. 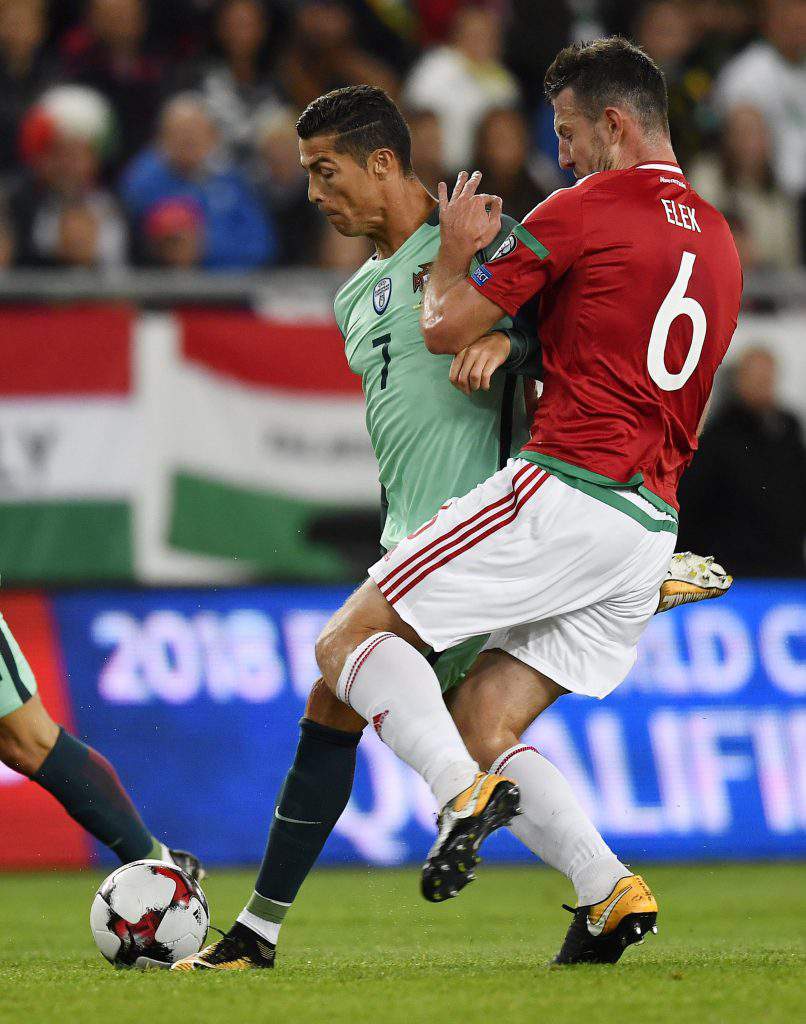 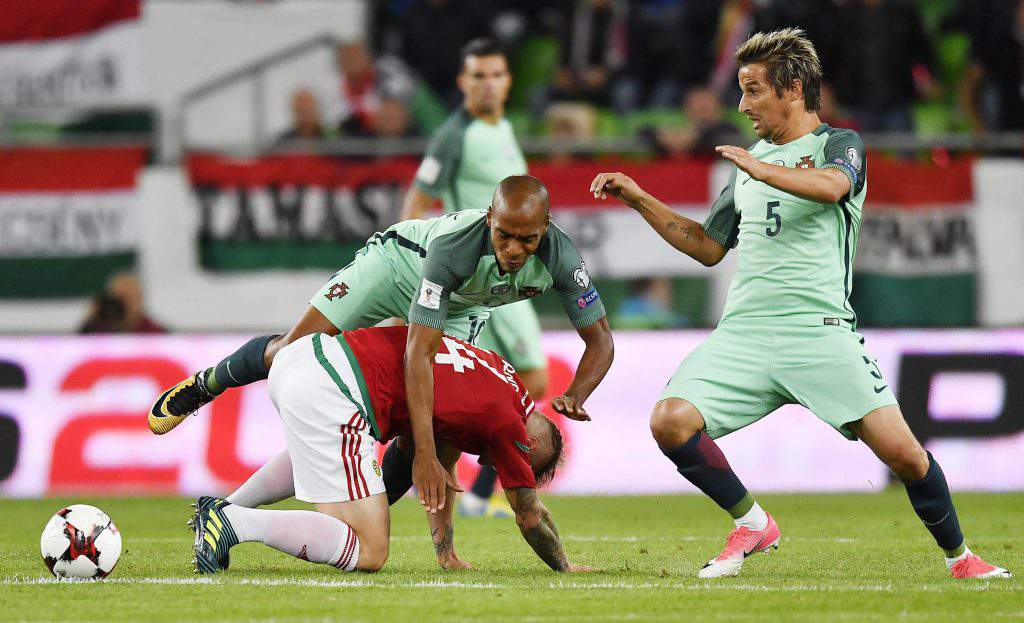 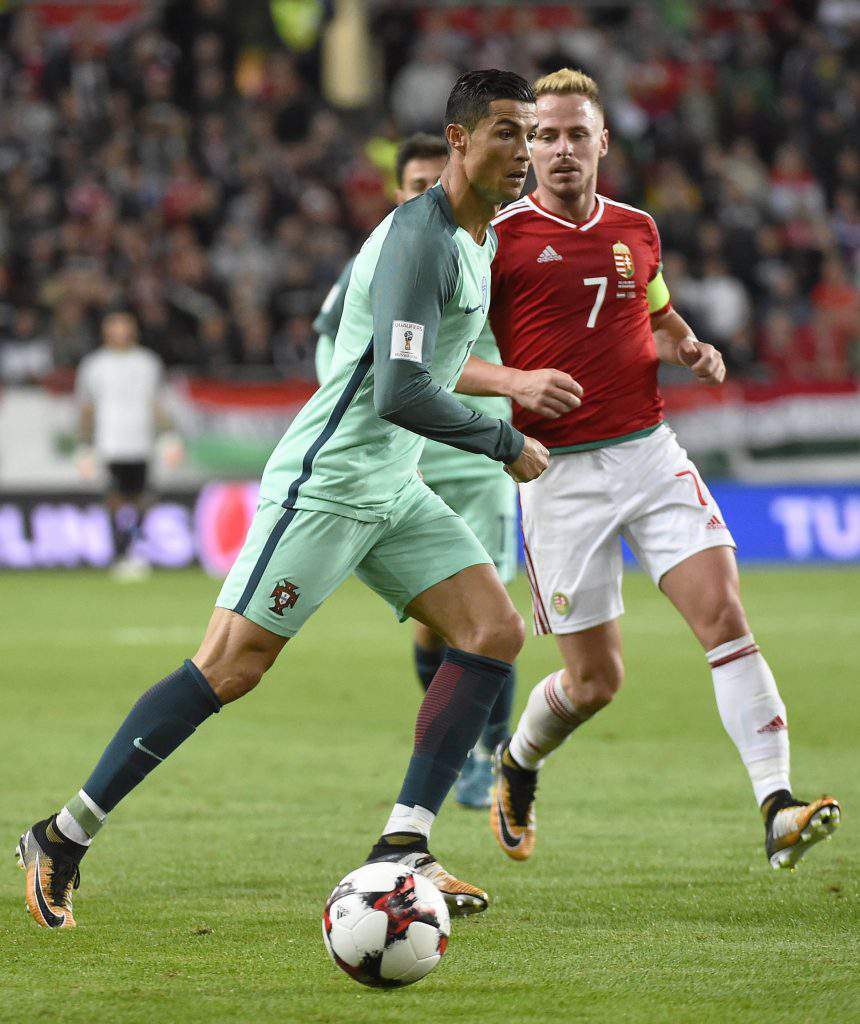 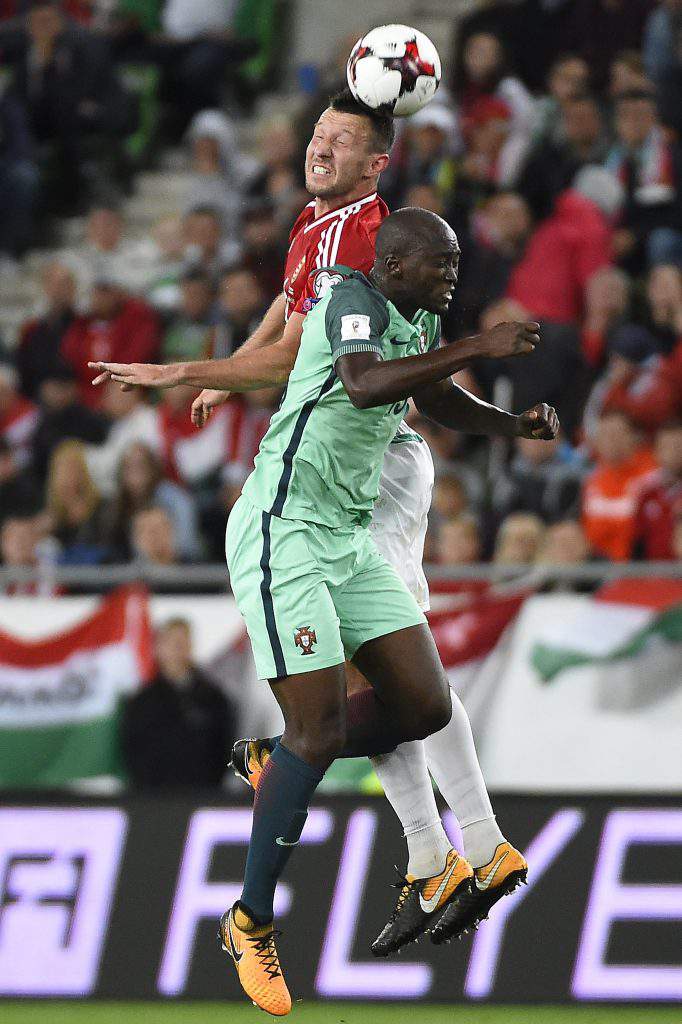 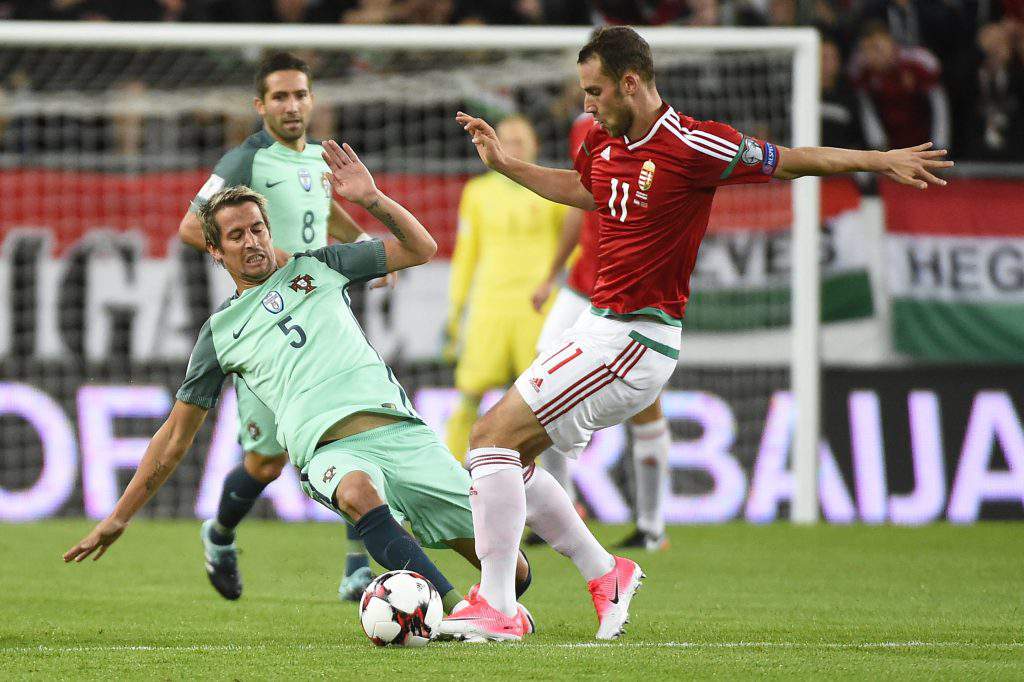 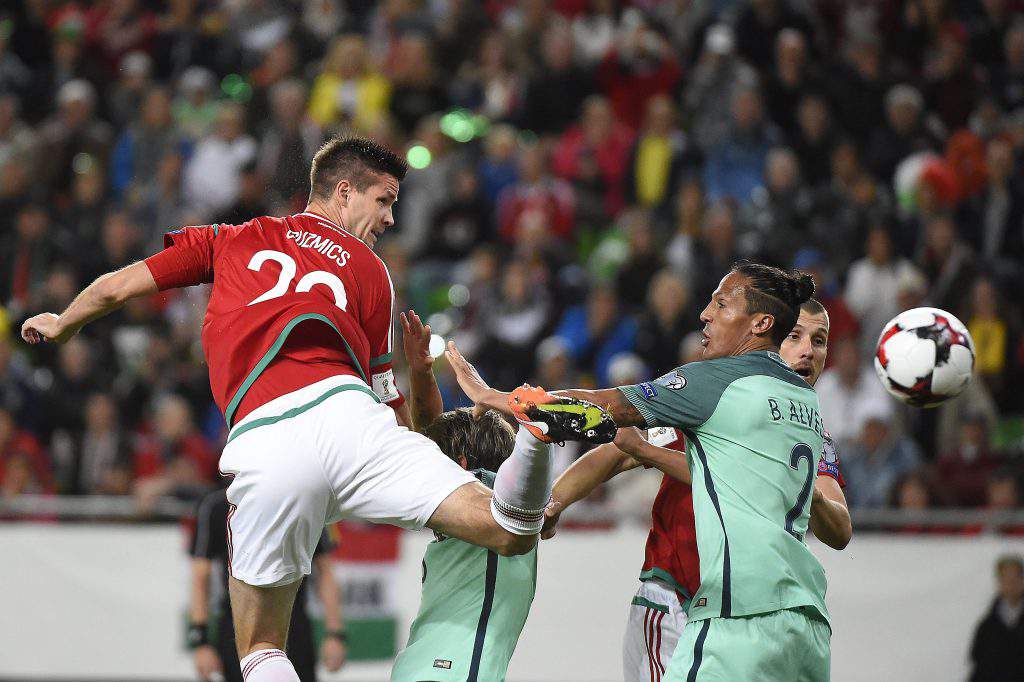 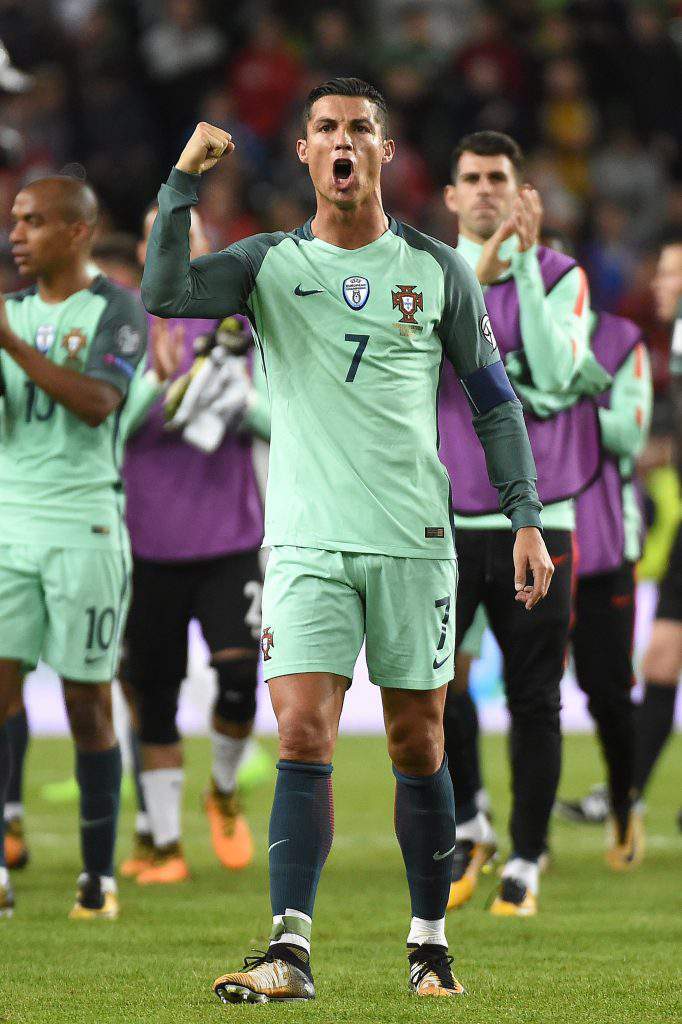 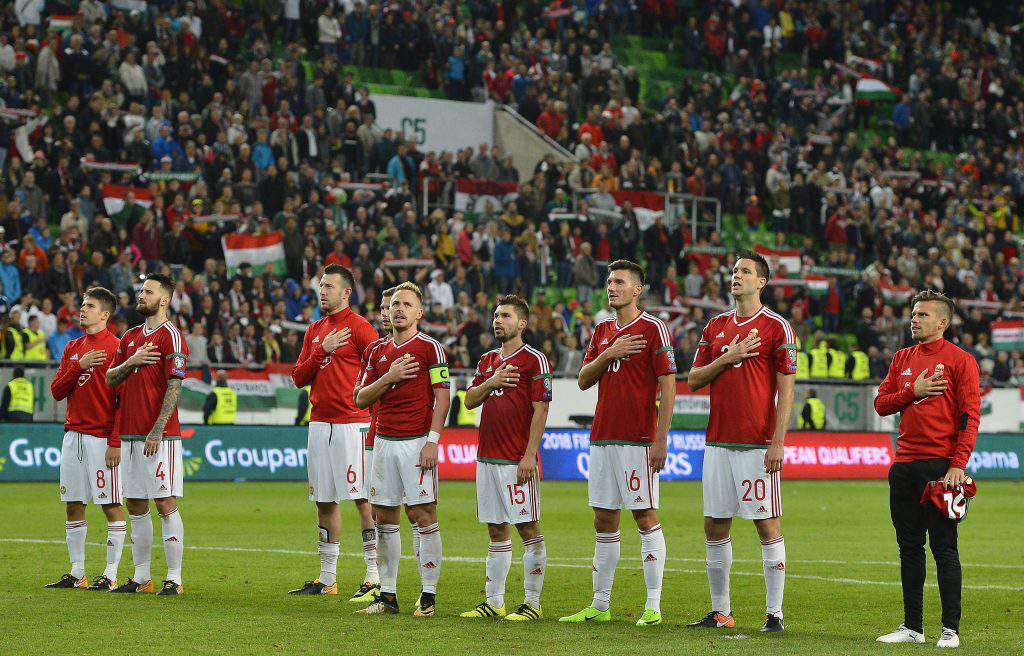