There will be demonstrations held all over the world to express solidarity with the Great Székely March on Sunday. Participants from 22 cities of 13 countries have already indicated that they would come together to call the world’s attention to Székely Land’s claim for autonomy. 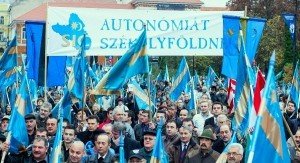 Our compatriots will march in Budapest as well as other Hungarian cities such as Szolnok, Debrecen, Keszthely and Sárospatak, too. As far as European capitals are concerned, there will be street demonstrations in London, Vienna, Brussels, Helsinki, Berlin, Stockholm, Pozsony-Bratislava as well as in such cities as Stuttgart, Germany; Halmstad, Sweden; Zurich, Switzerland and Topolya-Bačka Topola, Serbia.

Overseas, US cities Washington, Los Angeles, New York, and Canadian cities Toronto and Ottawa will also see demonstrations expressing solidarity for and calling the world’s attention to the Székely cause, and the Australian Canberra’s Hungarian residents will also march in the streets.

This year on 10th of March, thousands of people participated in the Székely Freedom Day in Marosvásárhely to show their sympathy and advocated the Székelys’ claim for autonomy, carrying Székely banners and multilingual signs.