The workers are working to prepare the field of the new football stadion in Debrecen.

The twenty thousand seats new arena will be open on April 2014, and the Debrecen sports facility cost 11.45 billion Hungarian forint which is supported by the Hungarian government. 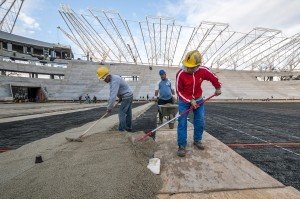