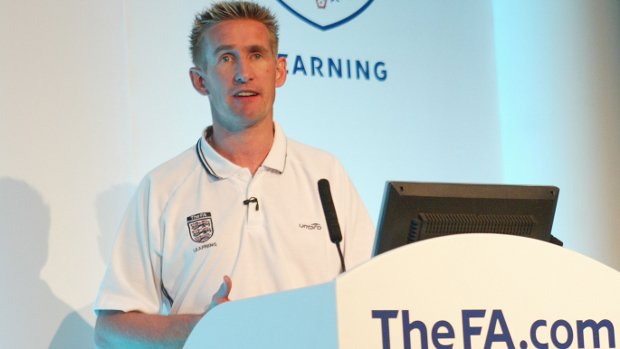 The Football Association’s coaching and learning philosophies were presented to technical experts from 53 European countries at a recent UEFA Coach Education Workshop in Budapest.

Head of FA Learning Jamie Houchen and FA Head of Coaching Awards Geoff Pike were invited to provide an overview of the player centred methodology which underpins The FA’s expanding coaching pathway.

Houchen believes the invite to speak at European football’s largest gathering of coaching minds disproves the myth that the English are playing catch-up to other countries when it comes to coach education. He said: “During international week the number of qualified coaches and coaching programmes adopted by England’s European counterparts are often elevated on to a pedestal and presented as something we should be aiming towards. “What we found last week is that in many aspects of coaching we are leading the way and other European countries, including many of the successful ones, are very keen to learn from us and adopt some of the ways we are doing things.”

Houchen and Pike provided a detailed insight into The FA’s Future Game playing philosophy which encourages a style of play based on technical and decision-making excellence, controlled possession and attacking creativity.

The Future Game philosophy guides the technical syllabus of all the courses included on The FA’s coaching pathway which, unlike many other European countries, offers coaches the opportunity to develop as a specialist in working with young players. Houchen added: “One of the areas the other nations were keen to learn about is our dedication to developing the next generation of specialist youth coaches. “Since 2006 we have been developing a strand to our coaching pathway which provides coaches with the opportunity to become highly skilled in the varied skills needed to work effectively with young players.”

The FA Advanced Youth Award – specifically focused at coaches working as part of the professional game’s Elite Player Performance Plan – has recently been added to the three Youth Module Courses available to coaches of young players. In addition to the Youth Award strand coaches studying with The FA can also follow the conventional pathway all the way up to UEFA A and UEFA Pro Licence. Pike underlined how the two strands of courses on offer are not exclusive to each other and instead work together. He explained: “Part of our presentation at UEFA focused on how the conventional coaching strand and the Youth Award strand are closely linked through philosophy and coaching methodology.

“As each coach progresses on their own individual pathway based on their own needs we expect them to utilise both strands on offer, as each course offering provides complimentary learning opportunities.”

Houchen believes the focus on specialism makes The FA’s coaching pathway more accessible to everybody in the game regardless of level. “Over the last couple of years there has been a dedicated focus in providing more bespoke courses allowing coaches to explore the detail of specialist areas of the game. “As well as having the Youth Award strand available for coaches of players aged 5-11, 12-16 and 17-21 we have also developed the Elite Coaches’ Courses which takes the very best A Licence holders and challenges them and stretches them beyond the current course provision. Houchen added: “Additionally, coaches can now study on position-specific courses which focus solely on different parts of the team unit.”