On yesterday, the 2 hours 40 minutes flight was followed by the team checking into the hotel close to the Matmut Atlantique Stadium.

Vidi have taken a 20 man squad to France for the Europa League Q3, 1st leg match against Bordeaux. The two sides will come face to face in the qualifier that kicks off at 20.30pm.

The plane carrying the squad took off at 10am and landed 160 minutes later in France. The weather there is cloudy and 20c. The team checked into the hotel at 13.30pm and lunch was followed by a period of rest. 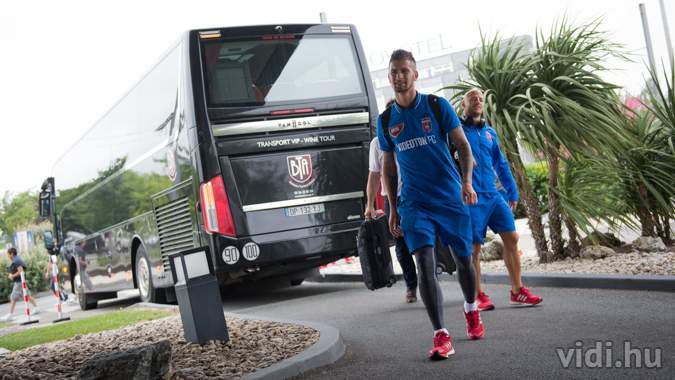 There were press conferences and training sessions for the Videoton squad.

Girondins Bordeaux’s manager Jocelyn Gourvennec and one of his players, Jeremy Toulalan met the media at 16:00pm at the Matmut Atlantique stadium.
“Our preparations have gone well and we have played four friendly games and won all of them. We are ready for tomorrow’s game! These sort of ties are easier a little bit for the side that plays the first leg away. The draw has helped Vidi a little bit but our aim is still to go through” – commented the 36 times former French international midfielder.

“We have improved a lot over the last half year. Our aim was to make it through to European competition and we did this. Now we would like to go as far as we can in the Europa League. As Jeremy has said, pre-season has gone well and the teams defence is in order” – said manager Jocelyn Gourvennec.

The Videoton squad arrived at the stadium at 19.00pm and manager Marko Nikolic and Loic Nego spoke to the media.

“I do not want to say too much before the game, as I would prefer us to show what we can do on the pitch. Bordeaux want to play their own game just as we would like to. The team that will concentrate more and take their chances will be happier in the end. I hope that we will play in a good tempo match and we can have no complaints about the weather” – commented Marko Nikolic.

“We respect our opponents and Bordeaux are a big club, but we are preparing to surprise them despite this. I am happy to be playing in France and I last played against the Girondins youth team when I was a youth player. My family will be at the game and I am looking forward to the match” – commented Loic Nego.

The Videoton training session started at 19:30pm and defender Attila Fiola took part together with new signing Ezekiel Henty. The players went through some tactical elements after the warm up.