The winning goal came on 70 minutes but Vidi put in a performance that was a real credit.

Stamford Bridge was the setting for Vidi’s second Europa League group stage match. Vidi had arrived to the capital on Wednesday and held a training session in the evening following Marko Nikolic’ press conference. He had said throughout the summer that Vidi had the right to enjoy a dream that had seen them overcome Dudelange, Ludogorets and Malmo in the qualifying rounds. The play-off’s saw Greek side AEK Athens emerge winners, but only just after two legs. That also meant qualifying to the Europa League group stage. Vidi suffered a defeat in the first game at home to BATE but were eager to do better in London.

The two sides had never met before as manager Marko Nikolic named his team for this big game.

The travelling Vidi supporters numbered 1300 in the corner of the stadium but they sure made notice of their presence with constant backing of the team in the all white kit.

Chelsea named a strong and experienced line-up against a Vidi side that was capable of dealing with the threat of a team, Marko Nikolic had described as being in the top 10 in the World. Maurizio Sarri had promised on Wednesday at the press conference to name a strong team and he kept his word with Fabregas, Morata, Kovacic, Pedro and Willian all starting. Marko Nikolic left Istvan Kovács on the bench against a team that was valued 41 times more than Vidi. However, the game is about football and not numbers! There were over 41,000 inside a packed Chelsea stadium as the whistle blew for the start of the game. 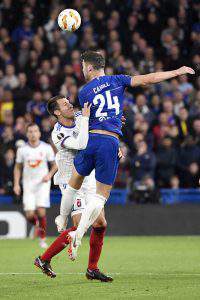 It was the home side attacking the shed end that started the more active but the Vidi defence coped with the early attacks. In fact a corner at the other end, which was Vidi’s second saw Roland Juhász rise to head at goal, but the ball was headed over his own crossbar by Chelsea defender Emerson. It was a good chance from the first attack from the visiting side. The blues stepped up the pressure with first Kovacic and then Morata and even Emerson shooting at goal. Pedro had a poor effort that Tujvel saved as the action continued inside the Vidi half. Chelsea had a frustrating evening as they failed to find a way past the Vidi keeper whose defenders did really well in front of him. This would be confirmed over the following 90 minutes.

There were moves that involved Vidi attacking Chelsea and that was summed up by Nego after 40 minutes who tried to beat Christensen, but his shot went wide of the target.

Things remained calm in the Hungarian sides defence, which was well marshalled by Juhász and Vinicius in the middle.

Nego again proved dangerous as he got inside the box and tried to convert from 7 meters, but he did not make a good connection and the home keeper collected the ball. There was also a good ball from Huszti to find Nikolov in between the two Nego chances, and the Macedonian was fouled on the edge of the box. The referee waved play on but the men in white were looking for a penalty. The teams went in at the break with the score at 0-0, which many did not count on before the match.

The second half started with a massive chance for Marko Nikolic’ side: Nikolov crossed to Nego, who first headed, but the rebound was hit at goal from 14 meters, which produced a very good stop from the Chelsea keeper. The home side failed to put Vidi under pressure during this period of the game as they had done in the first half. However, the ball was still mainly inside the visiting half.

The breakthrough came on 70 minutes when Fabregas lifted the ball to Willian, who flicked it onto Morata, who from close range made no mistake to find the net (1-0).

Hazard showed good skill on 72 minutes and Barkley hit a shot while off balance. Hadzic was on hand to block his shot that was heading goal bound. Barkley again proved dangerous four minutes later with his flicked header hitting the top of the bar following a cross. There was 7 minutes of normal time left when Scepovic played Kovács inside the box, and the midfielder hit a low shot that keeper Kepa saved really well from. Hodzic was just short to connect with the rebound. Another couple of minutes went by when Kovács claimed the ball and found Patkai, who played it onto Nego. He went on a run and shot from 24 meters, but it was not on target. The final whistle blew and Chelsea won 1-0 to get their second three points of the group.

The Hungarian supporters clapped the team off the London pitch following an evening of great backing. Vidi are next in Europa League action in Saloniki at the end of October. The next game will be the OTP league match with MTK on Sunday.

Prime Minister Viktor Orbán has called George Soros "the world's number-one…
Arena Mall Budapest could expand from its 42,000 square metres to 60,000 as the…
China Eastern Airlines announced here at a press conference on Thursday it had opened…
We and our partners use technologies, such as cookies, and collect browsing data to give you the best online experience and to personalise the content and advertising shown to you. I accept
Privacy & Cookies Policy