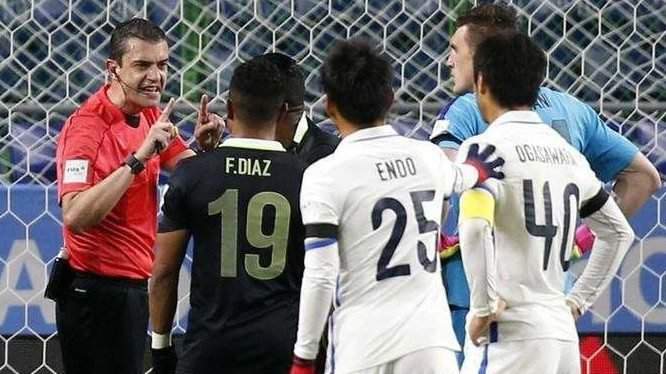 Three of Hungary’s elite referees have returned home from the FIFA Club World Championship in Japan which was eventually won by Real Madrid CF.

Viktor Kassai led the three-man delegation which also included assistants György Ring and Vencel Tóth during a tournament at which history was written in several ways. For example, this was the first time that Hungarian referees had officiated at the FIFA Club World Championship, Kassai at the same time becoming the first elite referee in football history to give a decision on the field of play based on video analysis of a specific incident.

“The introduction of video refereeing in practice was preceded by some serious preparation work on the parts of the FIFA technical committee and the referees out there [in Japan], the referee originally from Tatabánya told www.mlsz.hu in an exclusive interview.

“The expectation from the referees on the pitch was that they would work just as if there was no help from other quarters; with total concentration and responsibility. The use of the video referee in practice is laid down in black and white in a near-fifty-page document which details in which cases it should be used and what should be done, following the reading of which we’ve carried out tests at the venue and in training on how to assess debatable situations.

In regard to the much-discussed situation in the World Club Championship semi-final, the 2011 UEFA Champions’ League final referee said that “they felt that 14 players were moving towards the ball following a Kashima Antlers free-kick and one of them fell down amidst disputed circumstances. According to the video refereeing protocol, if the Colombians would have started a counter-attack, we would have been forced to blow the whistle immediately in the interest of coming to a decision, but because the Japanese team kept possession of the ball we weere able to wait until the next break in play”, Kassai said who confirmed three referees followed each of the tournament matches on television.

“The first thing they do is watch the disputed incidents again, then watch the live pictures to pick out those incidents which from the referees’ perspectives can then be seen to be happening in a ‘neutral’ venue. The third step is to register the most important events. For these three video referees, according to the provisions there is the opportunity, on the basis of the drafted protocol, to notify the referee of a definite decision or advise the referee to look at the incident again with their colleagues working on the sidelines.

This is how the process played out in the 29th minute of the semi-final overseen by Kassai when Dutch video referee Makkelie spoke in English to his Hungarian colleague on the pitch and suggested that check the incident by the side of the pitch.

“Naturally, in front of those screens and watching these matches are active, highly-qualified referees so I knew if they were to suggest something, I should take it seriously and could count on the merit of their decisions. However, following the suggestion of the video referee, the final decision remains the responsibility of the on-pitch referee”.

Kassai also said to mlsz.hu that FIFA’s experts had worked extremely well on the theoretical part of the project although in practice everything depends on how smoothly the process is followed on the pitch:

“We often hear opinions in support of the institution of video referees but preserving the flow of the game is also an important task. It is tough to perfect the system in a situation when not everyone agrees after a debatable incident. It will become evident after the implementation of the process whether those in football can accept the necessary wait to come to an appropriate decision in given situations when it might take half a minute, a minute or one-and-a-half minutes, or whether this is too long and spoils the enjoyment of football. FIFA’s experts are analysing all of these Club World Championship experiences now and will consider the future of the initiative. In any case we can be happy that this Hungarian trio could be a part of this undoubedly important process”.

This was not the only outstanding international football event that Kassai has been involved in this year, the European Championship and UEFA Champions League finals both also featuring him as fourth official, the former also seeing György Ring fulfil his familiar role as an assistant referee.

“Since I officiated at the Dynamo Kiev vs Manchester United Champions League match in 2007 I have, together with my colleagues, been proud to represent Hungarian refereeing amongst the European elite. The preparedness and technical knowledge of Hungarian referees is also shown through my colleagues István Vad and Tamás Bognár continually receiving refereeing appointments from FIFA and UEFA, while in women’s football Katalin Kulcsár refereed the Champions’ League final this year and in futsal we have also displayed outstanding results.

I trust that these great results will increase the popularity of the nationwide refereeing courses which will start in January 2017 and if I talk about domestic events, I would also like to emphasise that for me the domestic top-flight matches are just as important and it is always my aim to produce the best performances in the OTP Liga’s biggest fixtures too. I have officiated for 18 years in Hungary’s top tier and am fully aware that next February everyone will expect flawaless performances from me and my colleagues in NB I. To achieve this, the training camp in January where we can prepare for the spring season with high-quality, professional work will be of great benefit to us”, Kassai concluded.