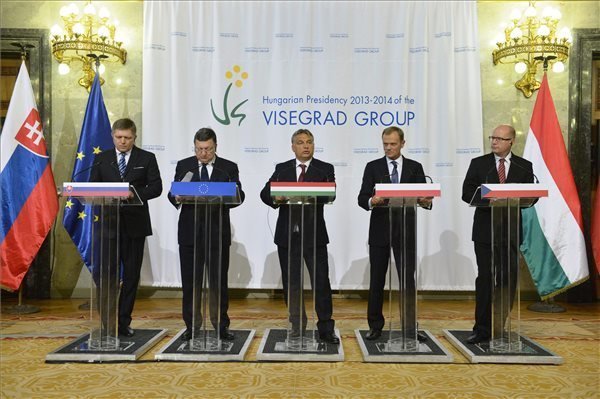 (MTI) – Energy security was one of the most important issues for the Hungarian presidency of the Visegrad group over the past year, Prime Minister Viktor Orban said on Tuesday.

Examples of this are the recent Polish proposal for a European energy union and the natural gas interconnector between Hungary and Slovakia, which allowed gas to be transported to Hungary from a non-Russian source for the first time, Orban told a press conference. The latter is a fantastic achievement with geo-political significance, he said after an event that marked the end of Hungary’s twelve-month presidency of the V4.

Orban said during the Hungarian V4 presidency all agreements aimed at building the north-south transport corridors have been signed.

“It is no illusion that in a few years roads and rail links of the highest standards will be available for travel from the Adriatic to the Baltic sea,” he said.

Europe needs new tools in the new era it has embarked on, Orban told a conference entitled “The Visegrad Group – Growth Engine of Europe” earlier in the day. The conference, organsied by the Visegrad countries of the Czech Republic, Hungary, Poland and Slovakia, was held at the Hungarian Academy of Sciences.

Orban said it was time the states of central Europe were louder in voicing their opinions on sensitive issues. Central Europe has authority to do so, as without it the continent’s economy would not grow, he insisted.

Hungary’s position is that the European Union’s contracts, including financial treaties, must be observed, and Hungary rejects any “surreptitious” changes to the EU’s basic treaty. Further, it considers blocking some sections of the fiscal pact an “extremely dangerous experiment,” he added.

On immigration, the Hungarian government is of the opinion that the free movement of labour must be ensured within the EU, but external immigration should be significantly slowed down, he said. If the continent needs skilled labour it should spend more on training its existing unskilled workforce, such as Hungary’s Roma, he added.

Orban said Europe must respect its past in order to renew itself and it must respect Christianity and nations. He added that it was important that marriage and family are not turned into relative values.

Orban urged cheaper energy sources and said everyone should be given jobs, as this would put the economy on the right track. He added that the state, if temporarily, should assume a larger role in job creation.

Slovak Prime Minister Robert Fico argued for the importance of the European Union’s cohesion policy at the conference. Cohesion policy is vitally important to EU member states as the results of the use of these resources are what the public can see best, Fico said. Slovakia will take over the rotating V4 presidency from Hungary from July.

Fico noted that EU funding helps finance 60-80 percent of all investments carried out from public funds, or as much as 80 percent in Slovakia.

He said that under Slovakia’s presidency of the V4, focus would be on competitiveness, growth, energy security, transport relations and job creation. He said under the V4 plus formation, there would be meetings with Switzerland at the end of the year and with France and Germany next spring. 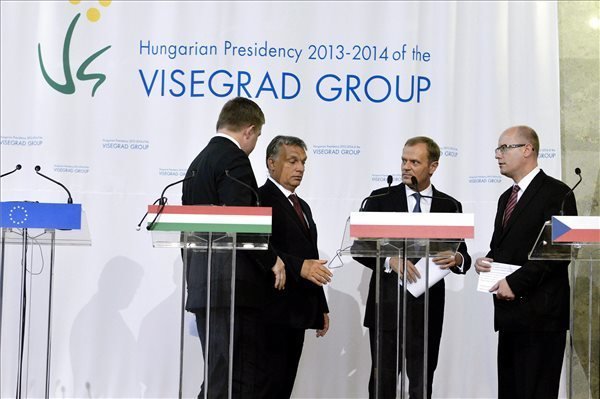 The European Union’s structural funds are the basic pillars of integration and help reduce the differences between the economic development of member states, Czech Prime Minister Bohuslav Sobotka said, addressing the conference.

Sobotka said that support provided by these funds can contribute to economic growth and job creation. Every euro of EU support received by the Czech Republic “influences the whole of Europe,” he said, and expressed hope that access to new funds would become available soon.

The Czech Republic supports the initiative to move Europe towards a knowledge-based economy because this can improve competitiveness and employment, he added, noting the importance of European energy links.

Donald Tusk, the Polish prime minister, said at the conference that Central European states were “players” who were able to voice their shared opinions in the EU. He said that Visegrad countries no longer expect praise, but have learned to be confident about what they set out to do. He said that governments must earn the trust of societies on their ability to spend EU funds well and noted the importance of transparency. 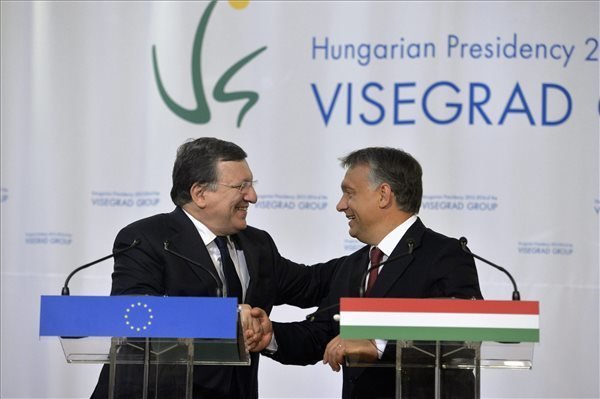 European Commission President Jose Manuel Barroso said, addressing the conference, that the message of voters in the European parliamentary elections was that there is a need for growth and job creation in Europe. He said all measures must be taken to improve living and working conditions and to this end the efficiency of utilising EU resources needs to be improved.

Johannes Hahn, the European Commissioner for Regions, said structural and cohesion funds of the EU were very important tools to reach the EU2020 goals, such as boosting job creation. He said the new reformed cohesion policy will make it possible to move from using resources for infrastructure towards economic development. He added that “brain drain” which affects Visegrad countries severely must be stopped and instead “a rotation” of workforce was preferred.

The summit of V4 prime ministers on Tuesday marks the end of Hungary’s twelve-month presidency of the Visegrad Group. Hungary now passes the baton to Slovakia.

An international theatre festival lasting several days started in Vac, just north of Budapest, on Tuesday, to tie in with the Visegrad summit.