Few inventions have had as profound an impact on the world as the automobile. The emergence of cars revolutionised numerous aspects of our lives. It completely changed traffic and led to the development of better roads. It also created new jobs to supply the demand for automobile parts and fuel. Cars have become the centre of the developed world.  However, pressing problems and dilemmas related to climate change and urban congestion mark a new era.

Currently, the automotive industry is facing a number of challenges. There is a global shortage of semiconductor chips that causes serious disruptions in production and even limits the availability of certain models, writes Telex. Manufacturers have to face the consequences of the strict environmental rules, such as using expensive technologies or fines for exceeding emission quotas. The market also has to adapt to the ever-expanding demand for comfort and safety equipment. Due to these factors,

prices are rising steadily and drastically in both the market for new and used vehicles.

As the result of the growing demand for prioritising pollution control and environmental protection and the upcoming Euro 7 emission regulations, the automotive future will most likely be electric. According to BBC, the rising tendency in electric car sales marks one of the biggest revolutions in motoring. Based on the latest forecasts, 20% of all new cars sold globally will be electric by 2025. This number can rise to approximately 40% by 2030 and

it is possible that every new car sold globally will be electric by 2040.

However, electric cars are costly for two main reasons. The batteries require large amounts of raw materials, including lithium, nickel and cobalt, and they can only be produced with expensive manufacturing technology. In Hungary, for example, a new small electric car costs 10 million forints (~EUR 27,532). Nonetheless, forecasters agree that the cost of battery production will be cheaper in the future. Some experts even claim that the difference between the cost of manufacturing electric and conventional cars will disappear over time.

hybrid and electric vehicles accounted for 5% of cars on the roads in Hungary in the first half of 2021. Nonetheless, these cars only make up 1% of domestic vehicles.

Hungary introduced green number plates for electric cars and certain hybrid cars in 2015. In the same year, the Budapest City Council approved the proposal according to which vehicles with green number plates can park for free in the whole territory of Budapest. Since then, numerous Hungarian cities have also introduced this parking benefit. The parking discount, lower fuel costs and the fact that the owners are exempt from paying registration tax all contribute to reducing the maintenance costs of electric and hybrid cars.

People can probably expect new purchase subsidies of several million forints further to support the spread of pure electric and hybrid cars, adds Telex. It is also very likely that

the benefits associated with a green number plate will gradually be reduced and permanently withdrawn over time.

The Hungarian NGO Clean Air Action Group has proposed that the government should gradually ban polluting cars from 2022. According to their proposal, the ban should be introduced first in the inner districts. Then, it should be extended to the area between the Grand Boulevard and Buda Boulevard. Finally, it would apply to the whole capital.

The average age of cars on Hungarian roads is almost 15 years. Hundreds of thousands of Hungarian people drive at least 10-year-old diesel cars. Thus, the proposal mentioned above would mean that people would not be able to use the now 6−7-year-old diesel cars in Budapest within five years.

Mayor Gergely Karácsony has recently submitted a proposal to the General Assembly of Budapest. In this document, he claimed that in order to reduce air pollution in Budapest, a significant reduction in the proportion of polluting cars is inevitable. Nonetheless, no plan can be adopted without consultation with the inhabitants and the relevant professional organisations. 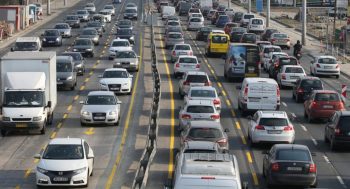 Read alsoCongestion charge to start with less than 2 EUR/car in Budapest soon?