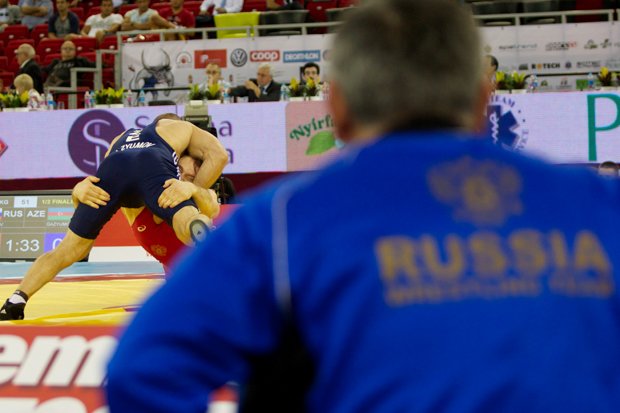 The always-festive Iranian fans had plenty to cheer about on the first day of the 2013 World Championships. Lead by Hasan Rahimi (55kg) and Reza Yazdani (96kg) the Iranian team hopped out to an early lead in the men’s freestyle team race.

Rahimi, who blitzed past Nariman Israpilov 8-0 in the semifinals, had a much tougher match in the finals where he faced Amit Kumar of India. After giving up an early caution point Rahimi earned a push out and caution of his own to take the world title by 2-1.
“I was really unlucky in the Olympics,” said Rahimi. “This is a great result for me.”
Yazdani earned an 8-1 in semifinal win over the Ukraine’s Pavelo Olinyk, and kept up the pressure in the finals, earning a 4-2 win over 2010 World Champion Khetag Gazumov of Azerbaijan.

Russian and Georgian Wrestlers Combine for 34 Points in Quarterfinals
Russia’s Nariman Israpilov and G. Edisherashivili of Georgia wrestled to an incredible 19-15 final in the quarterfinals at 55kg, wowing fans both in Budapest and on Twitter. Israpilov managed the win after scoring a final two-point takedown and two-point exposure for the win.
Israpilov went on to earn the bronze, beating of Kazakhstan’s Rassul Kaliyev by fall in the first period.

Hungary Stumbles Early
Host country Hungary had a tough opening frame on Monday, with Robert Kardos at 55kg and Woller Gergo (66kg) winning their first-round matches. Atilla Szmik lost his first-round match to Japan’s Takeshi Yamaguchi, 7-0.
“There was not a big difference between us,” said Woller on his loss to Mandakhnaran Ganzorig of Mongolia. “I just made a mistake that I hadn’t before in my career.”
The Hungarians will enter wrestlers at all remaining weight classes, including Greco-Roman where they are considered one of the best teams in the world.

Bronze Day for Russia
Though shut out from appearing in the finals in the first three weight categories of the World Championships, the Russian team finished with three bronze medals. Nariman Israpilov won by fall at 55kg, while Kurbanaliev won 7-5 at 66kg and Anzor Boltukaev won 8-5.

Tough Year, Tournament for Iranian Taghavi
Mehdi Taghavi has been through a tough few months. According to Iranian journalists in attendance Monday the two-time World Champion Taghavi lost his mother 10 weeks ago and is still dealing with the pain of her death.
Though he missed the original qualification in order to mourn, the Iranian team allowed him to compete in a special wrestle-off where he was able to secure his starting position
Taghavi wrestled well in his first match of the tournament beating the United State’s Brent Metcalf 5-2, but fell to Alexander Kontoyev in the second round, 3-2.
Rasul Khadem, Iran’s head freestyle coach and 1996 Olympic Gold medalist (90kg), showed continued support for Taghavi throughout the day, and was backed by the Iranian crowd who showed support for their beloved wrestler.