115 years of the Hungarian Parliament

The Parliament of Hungary was built in 20 years, using 30,000 square meters of stone and 40 million bricks. The building was completed 115 years ago on 8 October 1902, according to Pestbuda.hu.

After the Ottoman Empire conquered the southern parts of Hungary — including Buda — the national assembly was relocated to Pozsony (Bratislava) for almost two centuries. The idea of moving it to Pest came up in 1843.

The city was situated in the middle of the country and it was also an intersection of trade routes, so it was a splendid spot for establishing a true capital.

When the assembly agreed on the location of the building, they appointed József Lechner and Lajos Zerger as respondents of constructing the Parliament. 42 entries were submitted for the competition. The plans were not evaluated by the deadline for a mysterious reason, so they were sent to the National Archive, where they suffered some damages during the Revolution of 1848-’49.

The construction of the building was decided in 1880, and an embodiment was established to conclude the plans. Master architects Antal Weber and Miklós Ybl were among the members. Prime minister Kálmán Tisza got his hands on the designs of two other European parliaments that were under construction at that time: the one in London and the other in Vienna.

The new competition was announced in April 1882, and by February 1883, 19 entries were submitted. Four plans were awarded: Imre Steindl, Alajos Hauszmann, Albert Schikedanz and Vilmos Freund, and Otto Wagner were the winner contenders.

The embodiment decided to build the National Assembly’s headquarters in Neo-Gothic style like the English Parliament.

This meant that Steindl’s design came true, and Milkós Ybl also participated in the progress.

The plans were developed for almost one year before introducing them to the embodiment in 1884. The new designs put the building 72 meters North and the structure became narrower but taller.

After the council accepted the plans, the maquette of the Parliament was revealed to the public. Critics did not wait long. Most of the controversy originated from the Gothic style which many considered German and anti-Hungarian.  But not only the commoners criticized the plans: the National Embassy was also divided by the question whether this building was worth the high expenses or not.

The construction was finally authorized. Though Steindl lead the execution, he was constantly intimidated and ordered around by Lajos Tisza.

The execution began on 12 October 1885. The grounding took much longer than expected, as the whole aqueduct system had to be moved elsewhere. It meant one year of delay. 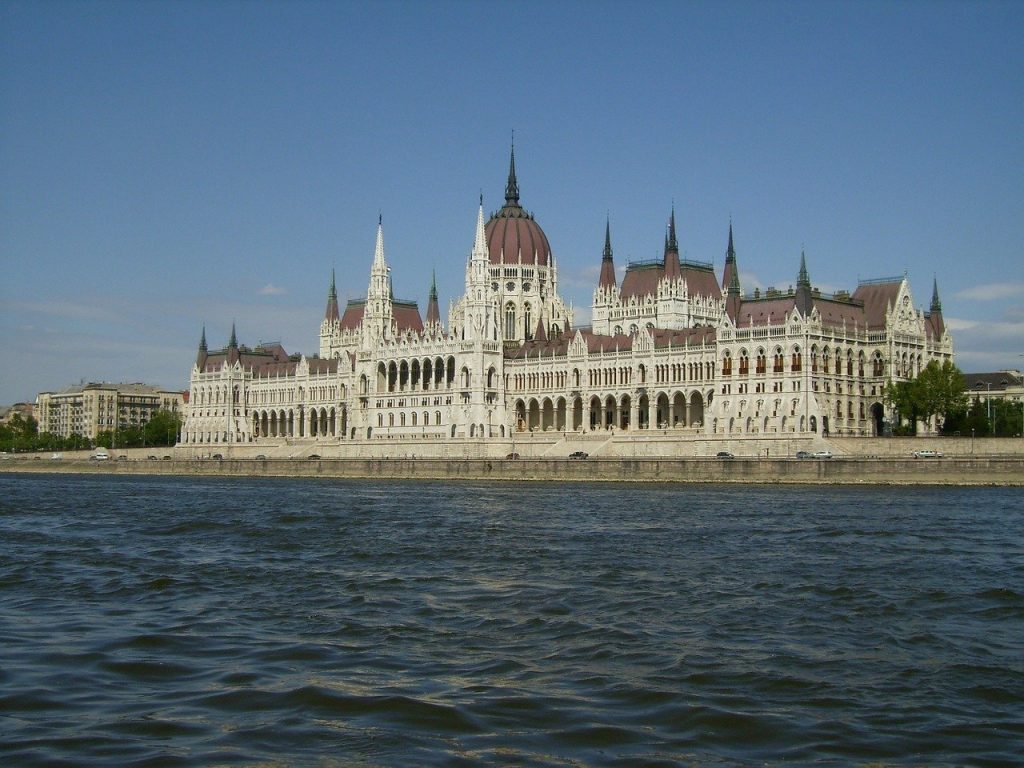 The stonemason works began in December 1887. The progress used a vast amount of resources: 40 million bricks and 30,000 square meters of stone. They were finished with the stonemasonry by the spring of 1894. Then the construction of the roof began, for which the architects used the most modern technologies: the whole structure was made of riveted and rolled iron holders. The dome was completed by May 1895.
(The whole process was reconstructed in a video recently).

The first assembly in the building was held on 8 June 1896. However, the building became fully functional only six years later, and the inner development was in progress until the end of 1904. Steindl, unfortunately, did not live to see the completion of his work, as he died in 1902.

The length of the Parliament is 268 meters, its greatest width is 123 meters, the height of the dome is 96 meters.

It was one of the largest buildings of its time.

The interior design does not accommodate to the Gothic design of the outside, as it mostly resembled to Baroque. The delegation room, which was used for discussing the common matters of Austria and Hungary during the time of the Monarchy, reflects Renaissance style.

The 88 ceramic statues that depict different professions were sent by Vilmos Zsolnay. The statue of the architect is based on Steindl himself.

The result, of course, did not awake only positive feedbacks. The opposition accused the government of using the long and expensive construction as a cover for embezzlement. The accusation lead not only to a media war, but István Tisza’s uncle called for a duel against the accuser.

The stlye of the building divided the public. Some people admired the enormous complex, while some others criticized its mixed styles of architecture. Some even said that the building went out of style by the end of its two decades of construction.

However, the building is in immaculate shape even today, 115 years after its opening.