The 15 wonders of Debrecen

Debrecen, Hungary’s second largest city, lies in the northern part of the Great Hungarian Plain, this is why it’s frequently referred to as the capital city of the plain. With its 200,000 dwellers it counts as a small city on an international basis, but visitors may choose from a diverse variety of sights to visit. Magyarorszagom.hu collected 15 of these to help you plan your trip to Debrecen 😉

Debrecen is the greatest city in the trans-Tisza region, it is also called “the Calvinist Rome” or the “citizen city”. It is the intellectual, cultural, economic, touristic, and transport centre of the East Hungarian region. Debrecen Day is celebrated on the 11th of April.

The dynamically developing city was first mentioned in a document in the 13th century. The city was known for its famous markets and Calvinist school all over the continent. It was also the venue of the Hungarian parliament in 1848-49 and 1944. Throughout history the city survived two firestorms and suffered great damage during WWII.

However, it is now living its heydays. It’s no surprise that international websites like Lonely Planet recommend visiting the city.

The church designed by Mihály Péchy was inaugurated in 1822, it is the biggest protestant church in Hungary, and it is one of the national symbols of the country. This was where Lajos Kossuth presented the declaration of independence in 1849. The church is open to visitors, you can admire the beautiful interior, the Rákóczi bell and the incredible view of the city from the top of the western tower. 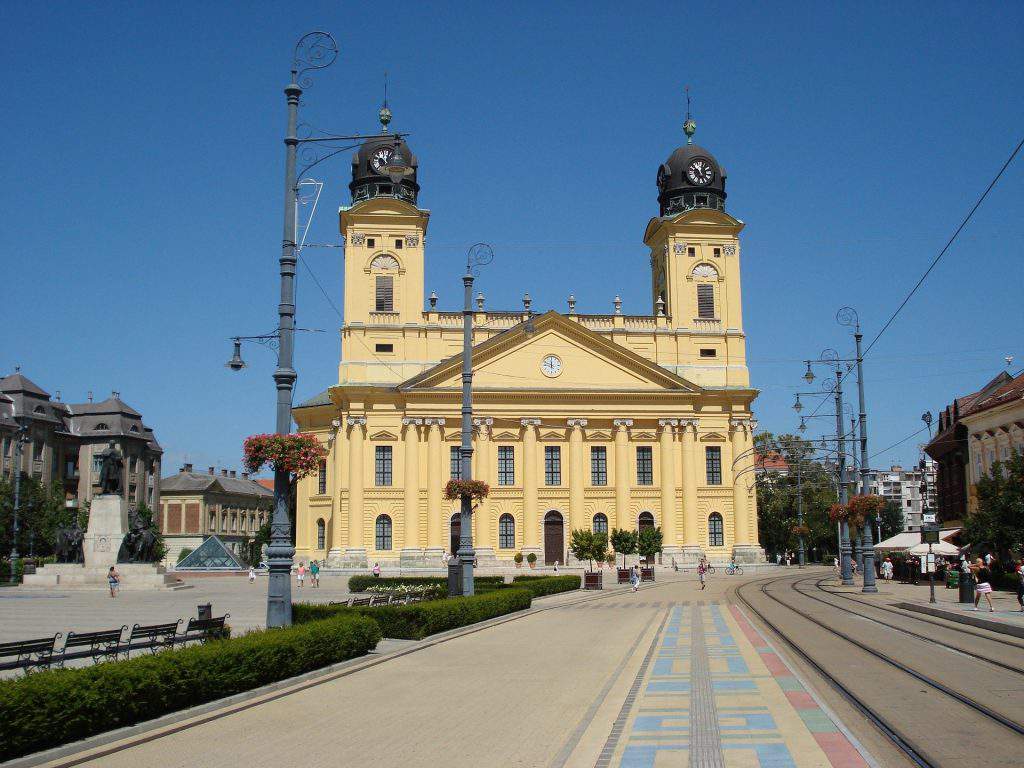 Science shapes our everyday life and the world that surrounds us. The recently opened science centre helps visitors understand everyday scientific phenomena with interactive exhibitions and different programmes for all age groups. Learn about mighty physics, chemistry and biology, and make sure to also visit the observatory.

Since Debrecen is very close to the park that is part of the UNESCO World Heritage, you can easily take a one-day trip to the country’s most amazing natural scenery. The huge grassland is the home of Lake Tisza’s flora and fauna, which you can even discover on a guided tour.

The musical festival held annually in the Great Forest entertains guests with local and international performances. Besides the concerts, you can also enjoy plays and cultural programmes. The performers included stars like Enter Shikari, Clean Bandit and Jess Glyne in past years.

The statue of Lajos Kossuth

Lajos Kossuth was the iconic figure of the 1848-49 revolution. He was the governor-president of Hungary for a short period before he was sent into exile. His statue is found in the neighbourhood of the church, where he presented the declaration of independence.

The museum of artisans and traditional craft techniques is found in the house of the onetime tanners. The exhibition focuses on traditional artisan objects and techniques. Moreover, visitors can get an insight into the world of embroidery, pottery and cheese making.

The park of the Great Forest

You can feel the touch of nature in the verdurous park that lies ten minutes away from the city centre. Visitors are welcomed with forests, parks, outdoor monuments and a cycling path.

If you’re a fan of contemporary art, you should definitely visit the MODEM Centre. The exhibitions are regularly changed in Hungary’s second biggest modern art museum, there’s always something new.

The neo-baroque style building is already worth visiting for its architectural value. The museum’s goal is to preserve and present the cultural heritage of the region. The permanent exhibitions feature the burying habits of ancient times, the fine art masterpieces of the 17th-19th century, and the collection of Frigyes Déri, the eponym and most significant donator of the museum.

The small zoo found in the middle of the Great Forest was opened in 1958, and is now the home of 100 animal species. Curious visitors are welcomed with educational programmes, through which they can learn about lions, tigers and monkeys.

The botanical garden of the University of Debrecen

One of the most illustrious Hungarian universities is open to visitors, so that they can admire the fountains, statues and the buildings of the campus. The university’s botanical garden is the home of tropical plants and diverse living things.

The institution evolved from the frameworks of the Debrecen Calvinist Dormitory. You can learn about the rich Calvinist heritage in the college that was opened in 1538. Today there’s also a museum functioning inside the building, where you can get an insight into the Calvinist history, religious art of the city and the training-college itself.

The award-winning statue was designed by Miklós Melocco. The marble statue depicts a white rose that commemorates the revolution of 1956. It was built in honour of those who died during the fights.

Debrecen’s biggest square is the venue of different events, festivals, among others, the Flower Carnival held every August. The popular carnival lasts for one week and dazzles visitors with gorgeous floral creations. Besides the programmes, you should also pay attention to the architectural masterpieces, like the Aranybika Hotel.

The theatre found in the Great Forest levels up the outdoor cinema experience, because you can watch multimedia movies on a “haze screen”. Besides the short films, guests are also entertained with a special laser show.