Ibrahim arrived to Hungary seven years ago when he was on his way to Denmark to meet his brother, but needed some money to continue his journey. He stayed, got married and opened a barbershop which was already mentioned in the Huffington Post  and the Reuters, hvg.hu writes.

Ibrahim was on the verge of deportation several times, but his girlfriend, now wife, always got him out of the refugee 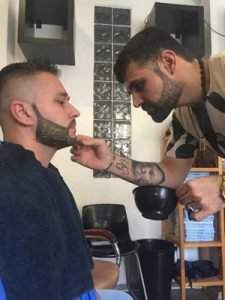 camp. Ibrahim could not get a refugee status as he came from an “economically stable country”, because the Syrian civil war had not broken out at the time. However, as a member of the Kurdish minority he did not have equal rights and decided to flee his country; he arrived to Hungary through Ukraine by foot.

After marrying Krisztina they opened a barbershop, and they have a child as well. Although, at first, mainly foreigners used their services, going to the barber is getting more and more popular and having a dyed beard is a big hit now.