UEFA Euro2016 is very special to Hungarians as, after long decades, we can finally cheer for our national football team at a world event. Basically all bars and restaurants started to organise match screenings and here are 14 popular outdoor places out of them. So if you’re planning to watch some matches in Budapest, this article is for you!

This screen will be the one the biggest screen and the place is an amazing, because you are next to the US embassy, and just few minutes walk the Hungarian Parliament or the Saint Stephan Basilic, so this screen take place in the middle of the capital city. The festival feeling is ensured by the 28 m2 screen 🙂

This is going to be the main cheering location in Budapest with the country’s biggest screen. The programme series will be held at the Athletics Centre on Margaret Island, which can fit more than 7000 people. They prepared a 144 m2 screen, food trucks, gastro walk, wide selection of beers, a chill zone, table football, teqball, keepie-uppie and penalty shootout competitions, and poolball as well. 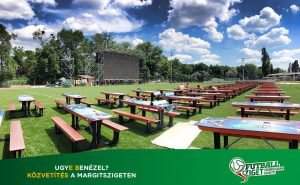 You can cheer in a historic environment in the inner garden of the Zichy Castle, which has been functioning as Kobuci Garden since 2009. Good news is that they won’t only screen the Hungarian matches but almost all of the events on a LED wall screen, for free. 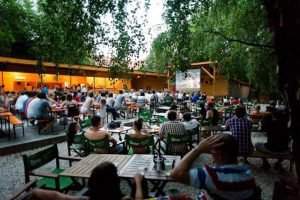 The staggered terrace cooled by the summer wind will turn into a stadium every night for one month. Refreshing drinks, Euro2016 menu, two mega screens and bookable tables are the arguments for “Why choose Akvárium?” However, they don’t take reservations for the 3 pm matches, so the spots can be taken depending on how full the place is. Reservations for the 6 pm matches cost 3000 forint/person and 5000 forint/person for the 9 pm matches. The amount can be exchanged for food and drinks.

The pleasant subdued lights are not only owed by the Liberty Bridge at one of the new but already popular terraces in the city. The location is ideal for spritzers with a breath-taking panorama and the standard mega screens during Euro2016 matches.

Europe’s biggest outdoor entertainment place cannot stay out of the fun, so Budapest Park will also await visitors in its Sport Garden with a 15 m2 screen, benches and table football. The entry is free until 9 pm and costs 500 forints thereafter. If there’s also a concert during some of the matches, then the concerts can be only visited with separate tickets.

WestEnd’s roof-garden will be called “Metropol fan terrace” for one month during Euro2016. They welcome visitors in the height with a 6×4 mega screen, traditional and French flavours, hamburgers, salads, desserts, beer selection, free programmes and frantic stadium feeling in case of Priskin goals. Before the opening match you can take part in free fan face-painting, an accordion performance and a can-can show. 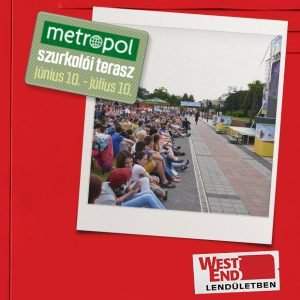 A new place called Giraffe (Zsiráf) is about to open at Eiffel Square. Excellent beers will be the basis in the neighbourhood of Nyugati Railway Station and a 30 m2 LED wall will try to attract many people during Euro2016 matches.

This is a place where you can relax and hide from the bustling of the city, where you can enjoy homemade ice cream specialties in the sunshine and admire Attila Fiola’s sliding tackles on a 12 m2 LED wall. On break days you may take part in Spanish movie nights organised by Cervantes Institute. 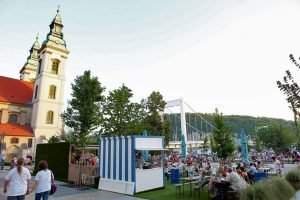 The fresh-fish of the Danube Coast will, of course, screen all matches: daytime matches on televisions and night-time matches on screens. It’s worth to checkout the place for its panorama (on the Chain Bridge, the Hungarian Academy of Sciences, and the Gresham Palace) and its famous beer-spritzer-party combo. 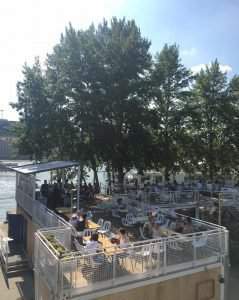