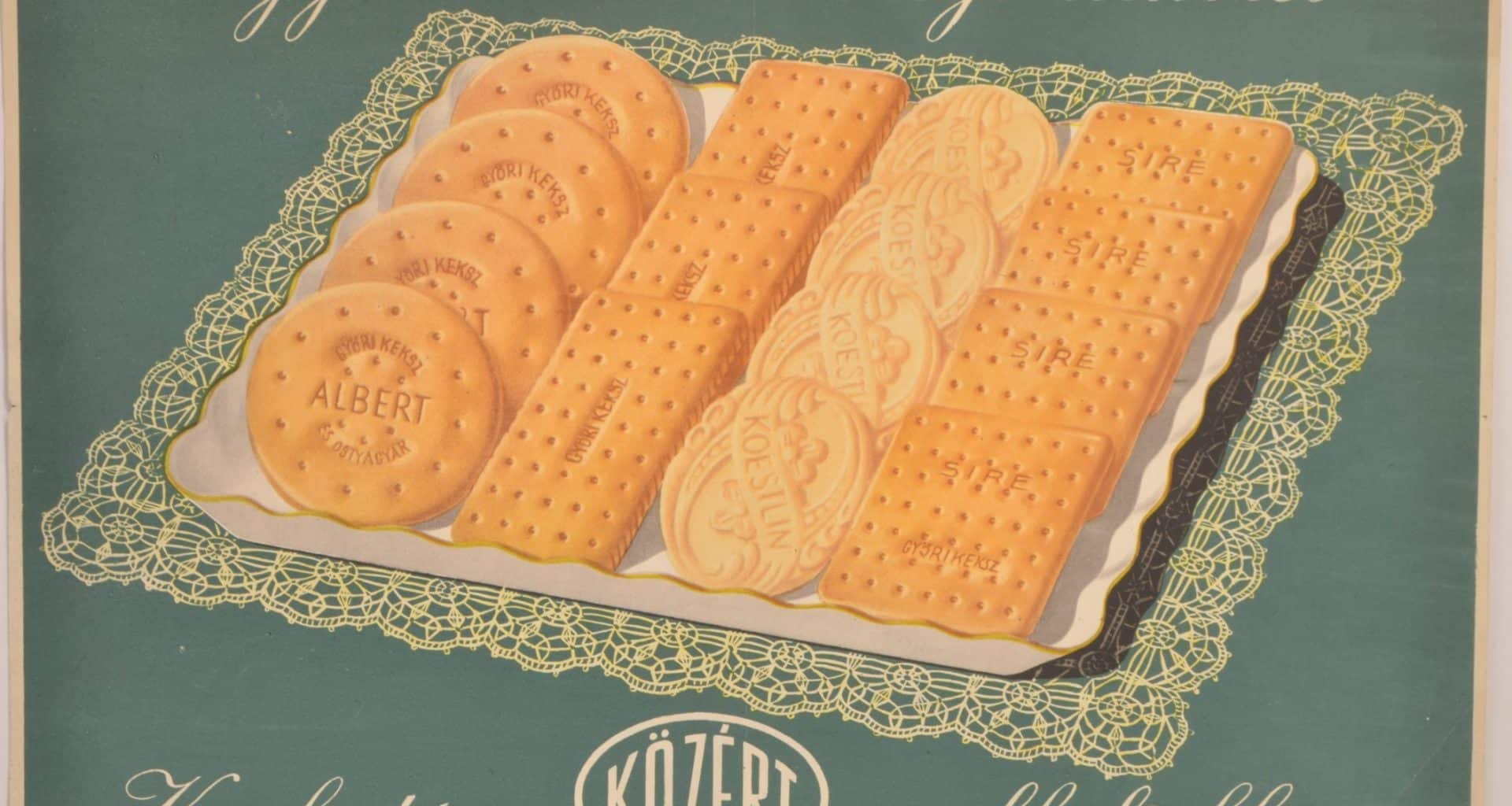 Biscuit market is expanding both worldwide and domestically

With an estimated four percent increase in turnover this year, the 28,000-tons domestic biscuit market has also boarded the international “biscuit express” as the global biscuit market expands by about five percent annually*. Moreover, total global sales are expected to grow from USD 120 billion to USD 160 billion in 5-6 years, said Sándor Sánta, President of the Association of Hungarian Confectionery Manufacturers at the Hungarian Museum of Trade and Tourism in Óbuda, where a biscuit exhibition was also opened.

Biscuits have been an important food for mankind since at least the seventh century. Persian bakers were the first to bake dry and hard biscuits made of grain and water, which were primarily food for sailors, travellers and soldiers. It also served as an indispensable food for the Roman legions, because non-perishable, easy-to-transport and high-energy biscuits were ideal for the army.

Europe is the birthplace of the tamed, softer, tastier, sweeter biscuit varieties aimed for civilians.

The harder flat biscuits are thanks to the French (1300s), the shortbread, airier sweets are thanks to the Dutch (1600s). The word and word-root “biscuit”, which is widely used in European languages, originates from the Latin term “bis coctus”, meaning twice baked.

Biscuits, predominantly containing cereals and water, and generally being free of or only being partially derived from animal-origin raw materials, have a lower impact on the environment than many other confectionery items and food products. Low-fat and low-sugar products, such as crackers, are the most sustainable, while biscuits filled with creams require the most resources. The production of one kilogram of biscuits has a CO2 emission of 1.3 to 1.8 kg and requires 11 to 27 litres of water per kilogram, which is similar to bread **.

In warm climates, and even where the climate crisis causes warming, the biscuit, which retains its consistency and quality even in the heat, requires no refrigeration and is an ideal snack. Recently, several manufacturers have introduced products that have a cream or chocolate filling that is completely covered by a biscuit of wafer coating, which is not only a good solution for enhancing the taste experience but is at once a heat-resistant solution.

Of course, the biscuit market is also expanding for other reasons.

As the choice within the product category broadens, more and more consumers will find their own biscuits which can become part of their balanced diet. Low-glycaemic index, sugar-free, protein-enriched, fruity, multi-grain, high-fibre or even ice cream biscuits which are to be served ice-cold are now also available.

Hungary offers good opportunities for biscuit production because the main ingredients, flour, water or oats are available from domestic ingredients. The demand for high quality oats for human consumption is expected to increase, which farmers should pay attention to and develop the production of higher quality raw materials than animal feed oats. At the same time, Hungarians consume less biscuits than in neighbouring countries for example, where the tradition of tea drinking is more widespread, and tea is unimaginable without some fine biscuits. At the same time, the offer of biscuits with tea and coffee is customary in more and more restaurants, which can further advance the development of the domestic “biscuit culture”. Consumers are also increasingly open to novelties and premium biscuits.

Dr Beáta Olga Felkai, Head of Department at the Ministry of Agriculture emphasized that the purpose of the department is to ensure the excellent quality of food and to reduce the market of low-quality foods. The Hungarian Food Book plays a key role in this by providing credible information and guidance to manufacturers and consumers alike. In addition, we have created a High-Quality Food (EQS) trademark system that affects producers, manufacturers, processors, distributors and customers alike, as the logo is an indication of excellent quality.

We believe that this will encourage producers and processors to develop, improve and sustain quality and will also be an effective tool of increasing market awareness.

The trademark furthermore also helps to inform the public, builds trust, guarantees higher quality, and contributes to the development of the general food consumption culture. The Head of Department at the Ministry of Agriculture added that international and domestic trends require continuous innovation, which we also consider important to encourage. This year’s OMÉK (National Agriculture and Food Exhibition) Food Industry Prize focuses on this and this field will continue to play a prominent role in the next funding period.

Péter Koósa, Managing Director of Detki Biscuits, representing the members of the Association of Hungarian Confectionery Manufacturers, emphasized that the company has been baking biscuits in Halmajugar for 36 years. With continuing innovation, the expansion of their product range and technological investments they keep following the footsteps of the first Director Kálmán Koósa, who – as a jolly joker – made the production soar, back in the ’80s. The company, owned by three families, was run by Olga Pavlova from 1991, who took it over from her husband, Kálmán Koósa. This year, however, they successfully managed a generational change in management that is usually a big challenge for Hungarian medium-sized companies, and the owners elected Péter Koósa, the son of Olga and Kálmán as successor.

Péter Arnold Kertész, a communications consultant at Mondelez Hungária Ltd. and Győri Keksz Ltd. reported that wheat, the cultivation of which is particularly exposed to global climate change, is the most important raw material for biscuit production. This is why it is of paramount importance that from 2019 the company has connected Hungary to its European sustainable wheat farming program, the Harmony Charter, whereby farmers supplying the company must minimize their environmental footprint, reduce their use of pesticides, decrease their CO2 emission and water usage, and furthermore must ensure biodiversity and that 3% of their lands feed bees as flower meadows.

their production plant in Győr has been making salty biscuits and crackers for almost 30 years and that 80% of their products are now sold abroad; they even export to East Asia, New Zealand, South and North America.

Thanks to their technical patent dating back to the ’50s, they are capable of baking extremely fine, multi-layered crackers. Their latest product is the Chio Potato Cracker, a light, thin-dough, potato cracker. However domestic sales are limited by the Public Health Product Tax (NETA), which is extremely high for salt crackers and biscuits, and the NETA combined with the VAT amounts to approximately 40% of the consumer price. The over-taxation of salt crackers and biscuits is difficult to justify from a public health point of view, as the annual consumption of salt crackers and biscuits in Hungary is only 170 grams, which is about 0,07% of our salt intake. Cracker manufacturers, even with the best intentions, are unable to reduce the salt content of their products to below the 1% salt content required for tax exemption, because unlike other snack types, salt in crackers and biscuits is not only an added spice but also an essential ingredient that regulates dough rise. This effect of salt has been exploited by all mankind for five thousand years, since ancient Egyptians, who most probably invented leavening.

Hungarian confectionery specialists have a decade-long history of graduate training at Szent István University and its predecessors.

Training is continuing at a new postgraduate level at the University’s Faculty of Food Science. In September of this year, the second year of the Masters’ program in chocolate, coffee and tea production will be launched, in the framework of the country’s first professionally recognized specialization providing a diploma. They welcome applications to this training until 15 August.

Perfect Hungarian recipes for the summer