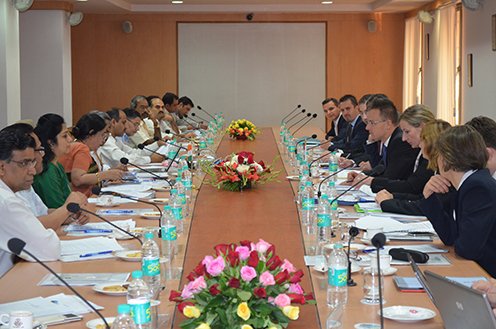 The committee agreed to raise the budget for joint research and development projects from 2 million to 4 million euros, he said. An additional fund to support the cooperation of small and medium-sized companies (SME) was set up with 100,000 dollars from each country, he added.

The committee moved to amend the air traffic agreement between India and Hungary to enable direct flights between Budapest and Mumbai. The flight will be operated by Wizz Air, via Dubai, the State Secretary said.

The committee also agreed to start talks with the companies of the Hungarian Water Cluster on projects to expand irrigation systems in India. At the moment, only one-third of land is irrigated in India, while the growing population’s food demand is increasingly pressing, Mr Szijjártó emphasised.

A cooperation agreement was also signed for a Hungarian company to supply devices for the ground operations of India’s Mars programme, he stated, adding that this was a very important space technology agreement.
Talks will start on the Hungarian Electricity Works MVM bidding jointly with its Indian partner for international projects and for Hungarian fuels group Mol to participate in extraction programmes in India, he said.

Further, Hungary will offer 200 scholarships to Indian university students, Mr Szijjarto underlined. The Hungarian Government will sign a strategic cooperation agreement with the Indian CG Electric, which manufactures transformers and high-voltage machinery. The company employs more than 600 in Hungary and there are talks of expansion, he added.

Prime Minister Viktor Orbán is set to pay an official visit to India in the second half of the week.